A passenger ship is a ship whose primary function is to carry passengers. The category does not include cargo vessels which have accommodations for limited numbers of passengers, such as the ubiquitous twelve-passenger freighters once common on the seas in which the transport of passengers is secondary to the carriage of freight. The type does however include many classes of ships designed to transport substantial numbers of passengers as well as freight. Indeed, until recently virtually all ocean liners were able to transport mail, package freight and express, and other cargo in addition to passenger luggage, and were equipped with cargo holds and derricks, kingposts, or other cargo-handling gear for that purpose. Only in more recent ocean liners and in virtually all cruise ships has this cargo capacity been eliminated. 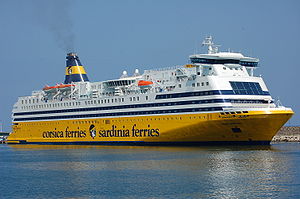 Passenger ships include ferries, which are vessels for day or overnight short-sea trips moving passengers and vehicles (whether road or rail); ocean liners, which typically are passenger or passenger-cargo vessels transporting passengers and often cargo on longer line voyages; and cruise ships, which often transport passengers on round-trips, in which the trip itself and the attractions of the ship and ports visited are the principal draw.

An ocean liner is the traditional form of passenger ship. Once such liners operated on scheduled line voyages to all inhabited parts of the world. With the advent of airliners transporting passengers and specialized cargo vessels hauling freight, line voyages have almost died out. But with their decline came an increase in sea trips for pleasure, and in the latter part of the 20th century ocean liners gave way to cruise ships as the predominant form of large passenger ship, with the main area of activity changing from the North Atlantic Ocean to the Caribbean Sea.

Although some ships have characteristics of both types, the design priorities of the two forms are different: ocean liners value speed and traditional luxury while cruise ships value amenities (swimming pools, theaters, ball rooms, casinos, sports facilities, etc.) rather than speed. These priorities produce different designs. In addition, ocean liners typically were built to cross the Atlantic Ocean between Europe and the United States or travel even further to South America or Asia while cruise ships typically serve shorter routes with more stops along coastlines or among various islands.

For a long time cruise ships were smaller than the old ocean liners had been, but in the 1980s this changed when Knut Kloster, the director of Norwegian Caribbean Lines, bought one of the biggest surviving liners, the SS France, and transformed her into a huge cruise ship, which he renamed the SS Norway. Her success demonstrated that there was a market for large cruise ships. Successive classes of ever-larger ships were ordered, until the Cunard liner Queen Elizabeth was finally dethroned from her 56-year reign as the largest passenger ship ever built (a dethronement that led to numerous further dethronements from the same position).

Both the RMS Queen Elizabeth 2 (QE2) (1969) and her successor as Cunard's flagship RMS Queen Mary 2 (QM2), which entered service in 2004, are of hybrid construction. Like transatlantic ocean liners, they are fast ships and strongly built to withstand the rigors of the North Atlantic in line voyage service,[1] but both ships are also designed to operate as cruise ships, with the amenities expected in that trade. QM2 superseded the Explorer of the Seas of the Royal Caribbean line as the largest passenger ship ever built, and in turn was surpassed by Royal Caribbean's cruise ship Freedom of the Seas. The latter ship, and her sisters, were superseded by ships of the Oasis Class delivered in November 2009.[2]

By convention and long usage, the size of civilian passenger ships is measured by gross tonnage, which is a measure of enclosed volume. Gross tonnage is not a measure of weight, although the two concepts are often confused. Weight is measured by displacement, which is the conventional means of measuring naval vessels. Often a passenger ship is stated to "weigh" or "displace" a certain "tonnage," but the figure given nearly always refers to gross tons.

While a high displacement can indicate better sea keeping abilities,[3] gross tonnage is promoted as the most important measure of size for passengers, as the ratio of gross tonnage per passenger – the Passenger/Space Ratio – gives a sense of the spaciousness of a ship, an important consideration in cruise liners where the onboard amenities are of high importance.[4][5]

Gross tonnage normally is a much higher value than displacement. This was not always the case; as the functions, engineering and architecture of ships have changed, the gross tonnage figures of the largest passenger ships have risen substantially, while the displacements of such ships have not. RMS Titanic, with a gross tonnage of 46,329, but a displacement reported at over 52,000 tons,[6] was heavier than contemporary 100,000 – 110,000 gross ton cruise ships which displace only around 50,000 tons. Similarly, the Cunard Line's RMS Queen Mary and RMS Queen Elizabeth, of approximately 81,000 – 83,000 gross tons, but displacements of over 80,000 tons,[7] do not differ significantly in displacement from their new 151,000 gross ton successor, RMS Queen Mary 2, which has been estimated to displace approximately 76,000 tons,[8] or from the even newer 154,407 gross ton MS Freedom of the Seas,[9] which is also estimated to displace in the range of 75 – 80,000 tons.[10] With the completion in 2009 of Oasis of the Seas, the first of the Oasis Class ships, the Cunard Queens of the 1930s have clearly been passed in displacement, as the Oasis vessels were projected to displace about 100,000 tons.[11]

However, by the conventional and historical measure of gross tonnage, there has been a recent dramatic increase in the size of the largest new ships. The Oasis of the Seas measures over 225,000 gross tons, over twice as large as the largest cruise ships of the late 1990s.