From SpottingWorld, the Hub for the SpottingWorld network...
Jump to:navigation, search
For other ships of the same name, see HMS Charger.

HMS Charger (P292) is an Archer-class Fast Patrol Vessel completed by Vosper Thornycroft. She is just over 20 metres long and 5.8 metres wide and powered by two Rolls-Royce turbo engines. The ship is based at the Royal Naval Headquarters (Merseyside) in Liverpool and was commissioned in 1988.

She has 4 crew plus a Commanding Officer, and sails with a Training Officer and a complement of students. She is attached to the Liverpool University Royal Naval Unit (URNU), under the command of Lt Richard Hurman RN, who is also Officer in Charge of the Unit.

Liverpool University Royal Naval Unit (Liverpool URNU) is one of 14 URNUs in the country with the mission statement to 'educate a wide-spectrum of high calibre undergraduates and future opinion formers into the need for and role of the Royal Navy and career opportunities available within the forces'.

Liverpool URNU recruits undergraduates from the Universities of Liverpool, Lancaster and John Moores. Over 50 students attend drill evenings and other activities ashore.

Competitions are held with other university hockey, rugby and netball teams and the Unit also has a sailing team. The highlight of the sporting calendar is an inter-URNU sports weekend when the students compete against the 13 other URNUs. Liverpool URNU has fielded many successful teams, and had won the best mascot trophy in the majority of years. in 2009 Liverpool URNU came join second with Bristol URNU Overall only losing out to Wales URNU.

The students may also learn to fly in URNU flying courses or go on a Liverpool URNU organised expedition. Expeditions including skiing in Europe and mountain climbing in the UK. Recruitment for Liverpool URNU takes place each September.

Sea time is combined with time aboard HMS Charger at weekends, when she visits local ports such as Holyhead, Douglas and Fleetwood, and deployments during the Easter and summer holidays when she visits ports around the UK and northern Europe.

There is a social calendar, with formal and informal events which include a formal mess dinner and annual ball. 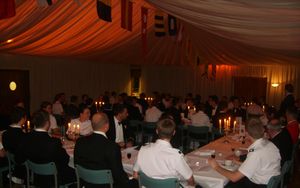 The ship is affiliated to the Cumbrian town of Maryport and regularly visits the town during deployments and for Remembrance Day ceremonies.

HMS Charger flies the White Ensign at events such as the Northern Ireland International Airshow, the start of the Clipper Round the World Yacht Race and the Honda Powerboat Championships, as well as providing a constant reassuring presence to mariners in the Irish Sea and further afield.