File:Knocking off at Harland & Wolff, Belfast.jpg
Workers leaving the shipyard at Queens Road in early 1911. The RMS Titanic can be seen in the background, underneath the Arrol gantry.

After buying Hickson's shipyard, Harland made his assistant Wolff a partner in the company. Wolff was the nephew of Gustavus Schwabe, a financier from Hamburg, who was heavily invested in the Bibby Line, and the first three ships that the newly incorporated shipyard built were for that line. Harland made a success of the business through several innovations, notably replacing the wooden upper decks with iron ones which increased the strength of the ships; and giving the hulls a flatter bottom and squarer section, which increased their capacity. 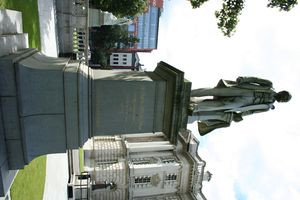 When Harland died in 1894, William James Pirrie became the chairman of the company until his death in 1924. Thomas Andrews also became the general manager and head of the draughting department in 1907. It was during this period that the company built the RMS Olympic and her sister-ships RMS Titanic and HMHS Britannic between 1909 and 1914, commissioning Sir William Arrol & Co. to construct a massive twin gantry and slipway structure for the project.

In 1912, the company acquired another shipyard at Govan in Glasgow, Scotland. It bought the London & Glasgow Engineering & Iron Shipbuilding Co's Middleton and Govan New shipyards in Govan and Mackie & Thomson's Govan Old yard. The three neighbouring yards were amalgamated and redeveloped to provide a total of seven building berths, a fitting-out basin and extensive workshops. Harland & Wolff specialised in building tankers and cargo ships at Govan. The yard was eventually closed in 1962, when the company opted to consolidate its operations in Belfast.

File:Shipbuilding, Liverpool 1944.jpg
A burner operating at night on the deck of a ship at Harland and Wolff's Liverpool yard. (27 October 1944)

In 1918, the company opened a new shipyard on the eastern side of the Musgrave Channel which was named the East Yard. This yard specialised in mass-produced ships of standard design developed during the First World War.

The company started an aircraft manufacturing subsidiary with Short Brothers, called Short and Harland Limited in 1936. Its first order was for 189 Handley Page Hereford bombers built under license from Handley Page for the Royal Air Force. During the Second World War, this factory built Short Stirling bombers as the Hereford was removed from service.

The shipyard was busy during World War II, building 6 aircraft carriers, 2 cruisers (including HMS Belfast) and 131 other naval ships; and repairing over 22,000 vessels. It also manufactured tanks and artillery components. It was during this period that the company's workforce peaked at around 35,000 people. However, many of the vessels built during this era were commissioned right at the end of World War II, as Harland and Wolff were focused on ship repair during the first three years of the war. The yard on Queen's Island was heavily bombed by the Luftwaffe in April and May 1941 causing considerable damage to the shipbuilding facilities and destroying the aircraft factory.

With the rise of the jet powered airliner in the late 1950s, the demand for ocean liners declined. This, coupled with competition from Japan, led to difficulties for the British shipbuilding industry. The last liner that the company launched was the MV Arlanza for Royal Mail Line in 1960, whilst the last liner completed was the SS Canberra for P&O in 1961.

In the 1960s, notable achievements for the yard included the tanker Myrina which was the first supertanker built in the UK, and the largest vessel ever launched down a slipway (September 1967). In the same period the yard also built the semisubmersible drilling rig Sea Quest which, due to its three-legged design, was launched down three parallel slipways. This was a first and only time this was ever done.

In the mid-1960s, the British government started advancing loans and subsidies to British shipyards to preserve jobs. Some of this money was used to finance the modernisation of the yard, allowing it to build the much larger post-war merchant ships including one of 333,000 tonnes. However continuing problems led to the company's nationalisation as part of British Shipbuilders in 1977.

The company was bought from the British government in 1989 in a management/employee buy-out in partnership with the Norwegian shipping magnate Fred Olsen; leading to a new company called Harland and Wolff Holdings Plc. By this time, the number of people employed by the company had fallen to around 3000.

For the next few years, Harland and Wolff specialised in building standard Suezmax oil tankers, and has continued to concentrate on vessels for the offshore oil and gas industry. It has made some forays outside of this market. The company bid unsuccessfully tendered against Chantiers de l'Atlantique for the construction of Cunard line's new Queen Mary 2[1].

In the late 1990s, the yard was part of the then British Aerospace's team for the Royal Navy's Future Carrier (CVF) programme. It was envisaged that the ship would be constructed in Belfast. In 1999 BAe merged with Marconi Electronic Systems. The new company, BAE Systems Marine, now owns the former Marconi shipyards at Barrow and on the Clyde and will likely construct the ships at one of these.

Faced with competitive pressures (especially as regards shipbuilding), Harland and Wolff sought to shift and broaden their portfolio, focusing less on shipbuilding and more on design and structural engineering, as well as ship repair, offshore construction projects and competing for other projects to do with metal engineering and construction. This led to Harland and Wolff constructing a series of bridges in Britain and also in the Republic of Ireland, building on the success of its first foray into the civil engineering sector with the construction of the Foyle Bridge and others such as the restoration of Dublin's Ha'penny Bridge.

Harland and Wolff's last shipbuilding project (to date) was the MV Anvil Point, one of six near identical Point class sealift ships built for use by the Ministry of Defence. The ship, built under sub-contract from German shipbuilders Flensburger Schiffbau-Gesellschaft, was launched in 2003.

Belfast's skyline is still dominated today by Harland and Wolff's famous twin Gantry cranes, Samson and Goliath, built in 1974 and 1969 respectively. There is also speculation about a resurgence in the prosperity of the shipyard thanks to the company's diversification into emerging technologies, particularly in renewable energy development, such as offshore wind turbine and tidal power construction, which may provide an opportunity to further improve the company's fortunes in the long term. For example, the United Kingdom planned to build 7,500 new offshore wind turbines between 2008 and 2020,[2] creating great demand for heavy assembly work. Unlike land-based wind turbines, where assembly occurs on site, offshore wind turbines have part of their assembly done in a shipyard, and then construction barges transport the tower sections, rotors, and nacelles to the site for final erection and assembly.

In recent years the company has indeed seen its ship-related workload increase slightly. Whilst Harland & Wolff has no involvement in any shipbuilding projects for the foreseeable future, the company is increasingly involved in overhaul, re-fitting and ship repair, as well as the construction and repair of off-shore equipment such as oil platforms. In late 2007, the 'Goliath' gantry crane was re-commissioned, having been moth-balled in 2003 due to the lack of heavy-lifting work at the yard.

In March 2008, the construction of the world's first commercial tidal stream turbine, for Marine Current Turbines, was completed at the Belfast yard. The installation of the 1.2MW SeaGen Tidal System was begun in Strangford Lough in April 2008. [3].

In June 2008, assembly work at the Belfast yard was underway on 60 Vestas V90-3MW wind turbines for the Robin Rigg Wind Farm.[4] This was the second offshore wind farm assembled by the company for Vestas. 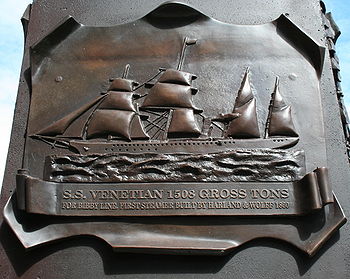 Ships built by Harland and Wolff include: [5][6]

This transport-related list is incomplete; you can help by expanding it.

The archives relating to the Harland and Wolff Heavy Industries are maintained by the Archives of the University of Glasgow (GUAS).