MS Mega Express Four is a fast ropax ferry owned by Corsica Ferries and operated on their routes from Nice and Toulon to Ile Rousse. She was built in 1995 by Schichau Seebeckwerft in Bremerhaven, Germany for Superfast Ferries as MS Superfast II. Between 2003 and 2006 she sailed for TT-Line (Australia) as MS Spirit of Tasmania III.[1][3]

Superfast II was the second ship built for Attica Group's subsidiary Superfast Ferries for their Adriatic Sea services from Patras to Ancona.[4] Her construction was identical to that of MS Superfast I.[1]

Superfast II entered service on 11 June 1995 on Superfast Ferries' Patras—Ancona route.[1][3] In April 1998, following the delivery of the new MS Superfast IV,[5] Superfast II was transferred to the Patras—Igoumenitsa—Bari route. From October 1999 until January 2000 she returned to the Patras—Ancona route as a replacement for MS Superfast III that was undergoing repairs after an onboard fire. In July 2003 Superfast II was sold to TT-Line (Australia), with a delivery date set in September of the same year.[1][3] TT-Line (Australia) had already purchased Superfast III and Superfast IV the previous year, renaming them MS Spirit of Tasmania II and MS Spirit of Tasmania I, respectively.[6] 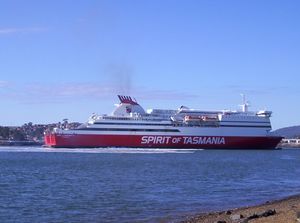 TT-Line took over their new ship on 30 September 2003 and renamed her Spirit of Tasmania III. She subsequently sailed to Hobart, Tasmania, where she was refitted for her new service. On 15 January 2004 she entered service on TT-Line's new Sydney—Devonport route.[1][3] Passenger demand for the new service proved smaller than had been expected, and the low passenger numbers combined with rising fuel costs led to the Government of Tasmania's decision to terminate the service in August 2006. As a result Spirit of Tasmania III was put up for sale.[7]

Corsica Ferries took over Spirit of Tasmania III on 5 September 2006 and renamed her Mega Express Four. She subsequently sailed from Australia to Europe. She entered service for her new owners in November of the same year.[1] Between January and April 2007 she was rebuilt at the Megatechnica shipyard in Perama, Greece with an expanded aft superstructure.[3][9] She returned to service on 4 May 2007.[1]