MS Splendour of the Seas

MS Splendour of the Seas is a Vision Class cruise ship for Royal Caribbean International. Her itineraries include European cruising in the Mediterranean and Baltic along with South America and other more "exotic" locations in Royal Caribbean's worldwide destinations. Dedicated towards an international clientele, official languages on the Splendour of the Seas include English, French, German, Italian, Spanish, and Portuguese. The second in the line of Vision Class ships, she features a seven-story lobby, rock-climbing wall, and a 12-hole miniature golf course. Her sister ship is Legend of the Seas. 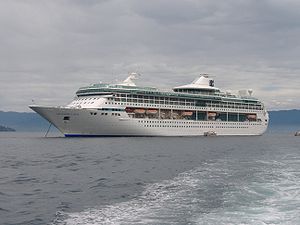 Splendour of the Seas at Ilhabela, Brazil (2008)

Splendour of the Seas has a total of eleven decks, the first eight of which are indoors. These decks house all the guest rooms, the theater, casino, shops, and main dining room. Decks 9 and 10 make up the outdoor portion of the ship, which includes the main pool, the rock climbing wall, and the spa and solarium with sliding roof. Deck 11 is the indoor Viking Crown Lounge atop the ship. The crew resides in quarters on Deck 1, separate from the guest facilities. The bridge is the most forward portion of deck 8, and the bridge extends out both sides of the ship several feet such that the bridge crew can walk on the extensions for an unobstructed side view. The miniature golf course is located on the aft top deck.

As the ship services both European and North American voyages, 220-volt and 110-volt power is wired throughout the ship, with a mixture of both outlet types found in the staterooms. The 220-volt system is the primary system for the lighting.

Splendour of the Seas has telephones installed in guest rooms, which can be used to make satellite ship-to-shore calls, or free room-to-room calls. Additionally, the ship has an onboard cellular service that supports some cellular phone networks,[2] including AT&T[3],

Internet access is available to guests on the ship both through an on board Internet café, as well as through wireless hot-spots available in several public areas of the ship and some of the guest rooms near those areas.[4] Access is available at all times, including at sea, and is charged at a rate of USD 0.60 per minute while connected, whether through a wireless hot-spot or through an Internet café computer. Prepaid blocks of minutes are also available, bringing the per-minute price to as low as USD 0.40 per minute.

During the winter seasons, Splendour is based in Brazil, doing a series of itineraries from 3 to 12 nights throughout South America, her summers are spent based out of Venice, Italy, sailing 7 night cruises to the Western Med.