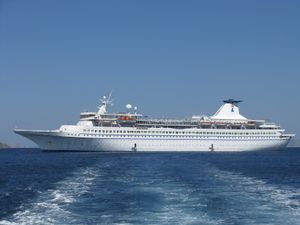 MV Aquamarine is a cruise ship owned and operated by Louis Cruise Lines, Cyprus. She was built in 1971 by Wärtsilä at the Helsinki New Shipyard in Helsinki, Finland for Royal Caribbean Cruise Lines as MV Nordic Prince. She has also sailed under the names Carousel and Arielle. IMO number: 7027411

The Nordic Prince was the second ship to be built for Royal Caribbean, and one of the first modern purpose-built cruise ships. She was launched on 9 July 1970 and entered service for RCCL on 31 July 1971. Like her older sister, MV Song of Norway, she was used for cruising on the Caribbean with Miami as the starting port. In June 1980 the ship was lengthened at Wärtsilä Helsinki by 26 meters. When RCCL acquired new tonnage in the late 1980s, the Nordic Prince was used for cruising around the world.

Nordic Prince became the first RCCL ship to be supplanted by larger tonnage in March 1995 when she was sold to Sun Cruises. Before the ship entered service for her new owners, the sky lounge around her funnel was removed. Renamed MV Carousel, the ship began cruising for Sun Cruises on 6 May 1995. During her time with Sun Cruises she spent summers cruising on the Mediterranean but during the winter seasons she returned to the Caribbean. In February 2000 the Carousel was grounded near Cancún, Mexico, which led to cancellation of five cruises while she was being repaired. Toward the end of her service with Sun Cruises the ship received MyTravel funnel colours. In the early 2000s Sun Cruises started pulling out of the cruise business. In July 2004 the Carousel was sold to Louis Cruise Lines, Cyprus, but chartered back to Sun Cruises until May 2005. The Carousel was the last Sun Cruises ship in service.

Louis Cruise Lines renamed the ship MV Aquamarine and starting from June 2005 she was used on 7-day cruises around the Mediterranean with Genoa as the starting port. In April 2006 the ship was chartered for five years to Transocean Tours who renamed her MV Arielle. However, the charter was apparently terminated by early 2008, when the ship returned to Louis fleet and reverted to the name Aquamarine.[1][2]

Thursday 9 May 2008 — The Aquamarine cruise liner was diverted to Milos, an island in the Aegean Sea, after a 1.5-meter gash was found on its hull at about 1.5 m above the water line. The ship's hull was damaged after it scraped against a pier during its departure from the port of Iraklio in Crete to the resort island of Santorini. The 872 passengers and the 407 crewmembers on board were safe.