Carnival Dream is a Dream class cruise ship and is the latest in the Carnival Cruise Lines (NYSE) ships to enter the fleet;[4] entered service on September 21, 2009. At 130,000 tons, she is the biggest the line has ever built. Her sister ships,Carnival Magic is expected to enter service in June 2011 while Carnival Breeze is expected out in Spring of 2012.

The ship and her sister, Carnival Magic are expected to have the widest variety of activity, dining, and entertainment options of the entire fleet.[5]

Carnival Dream and its sisters is currently the biggest ship ever built in Italy, by Fincantieri.[6]

The ship has an array of cabins to choose from. The cabins ranges from interior staterooms to suites. In addition, the ship introduced newer forms of cabins for Carnival Cruise Lines. One new type of cabin is a deluxe ocean view stateroom. The deluxe ocean view stateroom has two separate washroom facilities. Another new cabin for the cruise line is cove balcony stateroom. The cove balcony stateroom has a partially enclosed veranda. The ship features special spa staterooms that are currently available on Carnival Splendor.[7]

Carnival Dream is the first Carnival ship to feature a water park with multiple slides as a newbuild. The ship uses a larger variation of the water park that was recently added to the Fantasy class ships. The ship features a 2-deck miniature golf course. The ship also features a wide outdoor promenade deck that includes an outdoor cafe and a whirlpool jacuzzi in four places along the outside edge of the deck. [7]

Comparisons to Other Cruise Ships

While the largest cruise ship operated by Carnival Cruise Lines, the ship will not be the largest in the world, being surpassed by Royal Caribbean International's Freedom-class and Oasis-class and Voyager-class of ships as well as Cunard Line's RMS Queen Mary 2 and Norwegian Cruise Line's Norwegian Epic. By comparison, Carnival Dream is roughly equal to Royal Caribbean International's Voyager-class. However Dream is 17 feet shorter, and 8,000 gross tons lighter.

Carnival Dream is an all new class of ships for Carnival Cruise Lines. She features facilities similarly designed and used on the previous generations of Carnival ships while presenting a few new features. Significant alterations have been made to the public access areas of the ship like Deck 5, which has an exterior promenade that runs the entire perimeter of the ship.[8] 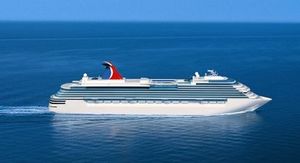 Decks and facilities are based on the basic layout elements of the Destiny class and Carnival Splendor, with newer elements.

Since the ship's announcement, there has been some debate in cruising circles as to whether or not the phrase "the Largest 'Fun Ship' " is misleading. It has been cited by some familiar with the industry as possibly creating confusion with Royal Caribbean International's larger ships. However, it has been noted that "Fun Ships" is a Carnival trademark and the Carnival Dream is the company's largest ship, and the first of the Dream Class of ships. It is 1,004 (306 m) feet in length, displace 130,000 tons, and has 1,823 cabins according to a Carnival spokesman.