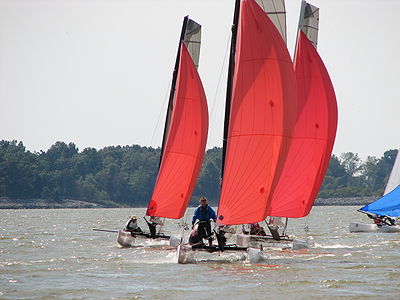 The Formula 18 class, with its F18 abbreviation, is one of the success stories in the sport catamaran scene. It was started in the early 1990s and quickly grew to a full sized ISAF recognised class with big racing fleets all over the globe. Before the turn of the century, the F18 class was attracting up to 150 boats and crews to their world championships. Since then a limit has been placed on attendance (max 150) and therefore qualifier rounds are held in several areas to decide who may go to the world championships and who may not.

Currently the F18 class is serviced by 11 professional boatbuilders who all have designed and built their own F18 boat. This is possible because the F18 class is a Formula class. This means that any boat that adheres to a certain limited set of general design specifications may participate in all F18 races. This has led to a score of homebuilders and professional builders to design their own F18 boats and racing them in this class.

There other rules that regulate smaller details.

The class around the world

These F18 boats are equipped with asymmetric spinnakers and as a result they are true sport catamarans that require a skilled and physically fit crew if one wants to do well in races. However many crews also use this catamaran for purely recreational sailing. The F18 boats are actually quite fast despite their heavy construction and the skill level in this F18 class is second only to the Olympic Tornado class. More often than not one can see Olympic catamaran sailors participate in F18 racing. For them the racing is good training. The skill level was raised as a direct result.

The F18 class is really active and has full racing circuits in many places around the globe. Several thousand boats have been sold over the years. The F18 class is a fully respected member of the main international catamaran classes in the following list: A-cat, Tornado, Hobie 16, and F18. These 4 classes make up the top in a sports catamaran scene that contains tens and tens of sub classes. The F18 class had earned this position within a timescale of only 7 years (1993 - 2000) and it is still maintaining a good growth.

The Formula 18 class was the first sports catamaran class to use the identifier "formula" and "F" in their name. In this respect and the way it is governs the boats it is similar to F1 car and motor racing. The success of the F18 class during the 1990s quickly led to a proliferation of other Formula classes like the F20 and F16 classes. It must be said however that the identifier "formula" and "F" was first well known in the early 80ies in relation to the bigger boats like F40 catamarans, F60 trimarans, F28s, and more. But these are not part of the sports or beach catamaran scene. The F40's as an example were 12 m long and required a full crew in order to race.