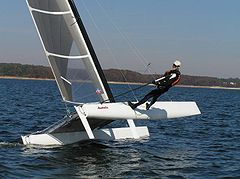 The A-Class Catamaran, often abbreviated to A-Cat, is a developmental class sailing catamaran for singlehanded racing.[1]

The class was founded during the 1960s and was part of the 4-tier IYRU (now ISAF) approach to divide up the sports catamaran sailing scene into 4 separate groups. These A, B, C and D classes were governed by a very small set of class rules to which each design had to comply.[2] In the beginning it was just:

All boats designed and built to these specs would be grouped into one fleet and race each other for crossing the finish line first.

The A-Class is really the only true survivor of those 4 main classes. The B-Class quickly splintered into a score of sub classes like the Hobie 16's, Formula 18's and other classes that contain far more and far stricter class rules. The C-Class quickly developed into the really high tech and vanguard boats that were used in the Little America's Cup. These require immense investments of time and money to race and so this class is extremely small but still maintains its status as the ultimate sailing catamaran designs. The D class never really got off the ground in earnest.

The official organisation for the A-Class catamaran is the IACA (International A division Catamarans Association).

The A-Class rules were expanded over time to prevent the cost of these boats from rising too high and to ensure fairness in racing.

The A-Class design has over time converged to a single sail rig using a lightweight carbon mast of about 9 meters length and using lightweight pentex or Kevlar sailcloth. The hulls and beams are often made out of carbon fibre as well. This single sail rig (just a mainsail) allows these boats to truly excel when sailing upwind. Their lightweight and time tested sailing techniques make these boats very fast on reaches and downwind legs as well. They were often unbeatable on the race course and only with the introduction of the asymmetic spinnaker on other catamarans have they lost this position a little bit.

In the decades since their foundation the A-Class has gathered a significant international following and it has class organisations in many countries around the globe. Their world championships often attracts around 100 boats and sailors. It is also a class that still contains a significant portion of homebuilders, although their numbers are decreasing with every year due to the skills required to make a competitive boat. However, nearly all A-Class sailors tinker with their setups and boats. As it is a developmental class and the rules do allow so much variation, it is paramount that a top sailor keeps experimenting with new setups and generally tries to improve the design even more. Because of this general character of the class, the A-Class is often leading over other catamaran classes in terms of design development. Over time these other classes copy new findings for their own setups. Examples of such developments are: the carbon mast, the squaretop mainsail, the wave-piercer hull design and in general the use of exotic materials.

Apart from below list of commercial builders (alphabetical order), the A-Class catamaran can be home-built: