Current and notable past models

This series of boats is created of rotomolded plastic and is intended for casual and new sailors.

The Bravo is the smallest Hobie sailboat at 12' and is intended for one person but can carry two. The relatively narrow beam (53") compared to its 19' mast leads to considerable heeling, or tipping of the boat compared to other catamarans. The Bravo has the distinction of being able to furl its sail around the mast.

The Wave is intended for one to four passengers, but is easily handled by one with its 13' length, 7' beam, and 20' mast. The Wave was designed by the Morelli/Melvin Engineering firm, and has proved to be extremely popular with beach resorts and rental operations. It is often praised for being rugged and easy to sail. While described as slow and underpowered by catamaran standards, it has a Portsmouth yardstick similar to a Laser (dinghy) that is often considered to be a performance dinghy. Although marketed as a recreational sailboat, an owner-controlled racing class has organized and held regattas since 1998.

The Getaway is marketed as a "social boat" and is designed with room for up to 6 people, more than Hobie Cat's other boats. The boat has a trampoline both forward and aft of the mast, and is the only rotomolded Hobie to come stock with a jib and have an available trapeze. At 16'7", the Getaway is the same length as the Hobie 16; the beam is 7'8" and the mast is 25' tall.

The Hobie 14 was the original catamaran designed by Hobie Alter. The general shape and design of the boat is very similar to the later Hobie 16. They share many of the same parts; with the sails down, they are hard to tell apart without a tape measure. The 14 was originally designed to be sailed as a unirig with just a main sail. It is possible to convert a standard 14 into a Hobie 14 "Turbo", also known as the JT14, or H14T by adding a jib, trapeze and dolphin striker. No longer manufactured by Hobie North America, the Hobie 14 is still produced in limited numbers by Hobie Europe and Hobie Brazil.

The Hobie 14 is infamously known for its forward mast and very bent banana shaped hull. The forward mast and odd shaped hulls make the boat quite sensitive to weight placement fore and aft. If the helm sits too far forward, he or she can cause the leeward bow to dig in, resulting in a pitchpole. Hobie 14s are great for younger sailors that want a solo-able multi-hull that can be held down without much weight. The boat does not carry passengers well, but used boats can be found quite cheaply.

The boat is slightly faster than the Wave as standard, and much faster as a Turbo model, but cannot carry anywhere near the amount of weight that the Wave can. It is known for being difficult to tack without a jib. However, the H14 is very quick and light. With the ideal crew weight at about 155 pounds, it is an outstanding platform for an experienced Hobie sailor wishing to both single-hand and be able to right the boat by one's self when the inevitable flying hull goes over too far. 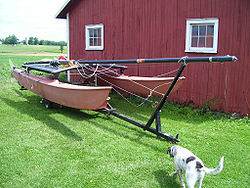 The 16 is the most popular Hobie Cat, both for recreational purposes and as a one-design racer. The boat is 16'7" long, 7'11" wide, and has a mast 26'6" tall, but only weighs 320 pounds. As with the 14, it is intended to be sailed from the beach through the surf, and to be surfed back in on the waves to the beach. Instead of daggerboards or centerboards, the 16 has asymmetrical hulls which act like foils and keep the boat from crabbing, or slipping sideways from the force of the wind. Both jib and main sails are fully battened and total 218 square feet (20 m2). A trapeze is usually used by the crew and helm.

One notable flaw is the tendency of the boat to 'pitchpole' when running downwind; the sail plan and distribution of the flotation of the hulls is such that it can push the bows down far enough to dip them under the water, stopping the front of the boat and leading to a cartwheel or sommersault and subsequent capsize of the boat. Sailors compensate for this by putting their weight as far aft as they can while running downwind, also raking the mast aft of the centreline reduces this motion and can improve the windward sailing ability of the boat.

This boat was available in two 'trim packages': the Sport has a jib and a small boomlett that is not attached to the mast and is intended for recreational use by two people, while the SE has only the main sail, a full boom, and is designed to be raced by one person. It is 17' long, 8' wide, has a 27' 7" mast and 168 square feet (15.6 m²) of sail area (200 ft² or 18.6 m² with the jib). Both models have swinging centerboards and 'wings', which are made of aluminum tubing that plug into the hulls and covered with reinforced vinyl or mesh covers that can be used as seats, backrests, or provide more leverage when trapezing. The uni-rig or catboat sail plan allows the 17SE to 'point' well, or sail closer to straight upwind than many other Sloop-rigged catamarans. As of 2007 this boat is no longer produced.

The FX-One is an import from the France-based Hobie Cat Europe company. Successor of the 17, this boat is designed both for single-handed racing (mainsail + gennaker) and dual-crew sailing (jib + mainsail + gennaker). In both configurations, this boat is eligible for the IHCA racing class. In the two-sailor configuration, this boat is also eligible for the Class 104 multihull class. Relatively uncommon in North America, the FX-One is 17' long, 8' 4" wide, with a 27' 9" mast and 172 square feet (16.0 m²) of mainsail area, 3.98 m² of jib area, 17.5 m² of gennaker area, and weighs in at 326 pounds (148 kg) with the dual crew set-up. It features wavepiercing hulls, and daggerboards.

Many people consider the Hobie 18 the quintessential “beach cat.” The Hobie 18 was designed to be not only fast but also rugged. It is designed to be sailed by a crew of two, but can easily carry four passengers when cruising. Experienced sailors can sail the Hobie 18 solo. Unlike the smaller Hobie 14 and 16, the Hobie 18 uses a symmetrical hull design. Although this design gives the 18 a speed advantage, it requires the use of daggerboards when sailing close-hauled or reaching to prevent slipping. The typical configuration for the Hobie 18 is with a both a main sail and a jib. The jib on the 18 is set up on a rolling/furling system that wraps the jib around the forestay when it isn’t needed. A double trapeze system is also standard equipment on the Hobie 18. Optionally the Hobie 18 may be equipped with wing seats (similar to the 17). Wings were available on the Hobie 18 in two fashions. The shorter wing "spanned" from the front to rear crossbar on the Hobie 18 Magnum, while the Hobie 18SX sported even longer wings. These wings reached aft to the stern and forward approximately 20 inches ahead of the front crossbar. Additionally, the SX model had a mast approximately 19 inches taller and high aspect mylar sails. Wings of both types, magnum and SX, are in much demand today due to the added comfort and space provided. They add about 40 pounds. Much to the dismay of many Hobie enthusiasts, the Hobie 18 is currently no longer produced. Length= 18', Beam= 8', Mast = 28' 1" (SX version is 28' 6.5") Sail = 240 sq ft (22 m2). Weight = 400 lb (180 kg) Hobie 18 Magnum Wing seats (mid 80's style) add 39 lb (18 kg).

The Hobie 33 is a 33-foot (10 m) monohull lift-keel boat designed to be very light and very fast. It is considered a ULDB or ultralight displacement boat. It was intended to be a trailerable, one design racer/cruiser. To be trailerable in all U.S. states without special overwidth road permits, beam was kept to just 8 feet, which is quite narrow for a boat of this length, although the Hobie 33 was advertised as being capable of sleeping 7 people. A total of 187 Hobie 33's were built between 1982 and 1986[2].

The design was the brainchild of Hobie Alter and Sheldon Coleman Sr. To start the project a Bill Lee designed ULDB Santa Cruz 27 named "Redline" was purchased, analyzed and then raced in southern California. Once the design stage started Lewie and John Wake were brought in to lend racing yacht design experience. Hobie 18 designer and legendary surfer Phil Edwards designed the keel and rudder.

There is an active North American class association[3] and national championships yearly. The Hobie 33 is still a competitive offshore sailing yacht and as recently as 2006, 'Mad Max' was the Overall Winner in the Newport to Ensenada Race, beating vessels of all lengths from 26-90 feet on corrected time using the PHRF formula. In 2005 the Hobie 33 was first in the doublehanded division of Transpac and went on to win its class against fully crewed boats.

In contrast to the Tiger, the Miracle 20 has 250 square feet (23 m2) of sail area and takes advantage of light winds. The 20 is 19' 6" long, 8' 6" wide, with a 31' mast, and weighs 420 pounds. Some of the early production models had a high rate of hull failures due to a manufacturing defect, but this was rectified in later models. As of June, 2007 this model is no longer in production. The Miracle 20 is designed by Jack Groeneveld, a Dutch catamaran sailor (European champion Prindle 19,winner of the Prindle 19 nationals etc.)

The 21SC (for Sport Cruiser) was Hobie Cat's first 'family boat'. Intended for casual sailing, this boat has a front trampoline, wings, an outboard motor-mount, and a built-in cooler. Though larger than the Getaway at 21' long, 8' 6" wide, with a 29' mast and 222 square feet (21 m2) of sail, the 21SC was quickly displaced by the more rugged, cheaper Getaway and has been phased out by Hobie Cat.

The 21SE hulls are similar to the 21SC but the similarities end there, the 21SE is a performance oriented boat. It is no longer in production but it had a beam of nearly 10' and 14' with the wings. It also had centerboards instead of daggerboards a 33' mast and 300 sq ft (28 m2). of sail. It had arched, curved crossbars. It was raced as a one design boat in professional racing circuits.

The TriFoiler is the fastest production sailboat ever created. This sailing hydrofoil, stands as the most unusual of Hobie Cat's boats. Designed by the brothers Greg and Dan Ketterman, this trimaran has two sails, one on each ama, and hydrofoils that lift the hulls out of the water at speed. It lifts on the foils at wind speeds between 10 and 11 mph (18 km/h) and quickly accelerates to twice that speed in seconds. On its foils, the TriFoiler sails at approximately twice wind speed up to about 35 mph and can pull 2+ g's in gybe turns. The Trifoiler is a production variant of the A class world sailing record holder Longshot and Longshot II sailed by Russell Long of San Francisco, which was also designed and built by the Ketterman brothers.

The TriFoiler seats two persons. At 22' long, 19' wide, with two 18' masts, and 145 kg (320 lb), the TriFoiler is the biggest multihull ever produced by Hobie Cat. The two sails have a total sail area of 215 sq ft (150 sq ft (14 m2) reefed). The TriFoiler's high price-tag, fragility, and usage limited to winds between 10 and 25 mph (40 km/h) with low waves, led the Hobie Cat Company to discontinue production. Approximately 30 Trifoilers were built prior to production starting at Hobie in 1995 and another 170 were produced by Hobie before halt of production in 1999.

See external link below for the Trifoiler Wiki site created by those who love and sail the TriFoiler.

Hobart "Hobie" Alter founder and creator of the Hobie Cat