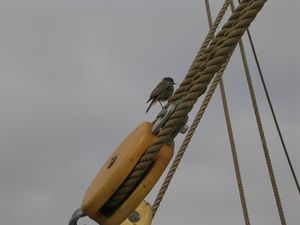 A bird perched near a wooden block
File:MaryRose-rigging blocks2.JPG
Various types of blocks of both wood and metal found on the 16th century ship Mary Rose.

In sailing, a block is a single or multiple pulley. One or a number of sheaves are enclosed in an assembly between cheeks or chocks. In use a block is fixed to the end of a line, to a spar or to a surface. Rope or line is rove through the sheaves, and maybe through one or more matching blocks at some far end to make up a tackle.

There are various types of blocks that are used in sailing. Some blocks are used to increase mechanical advantage and others are used simply to change the direction of a line. Some blocks ratchet, which means that they turn freely when a line is pulled in one direction but does not turn the other direction. This kind of block makes a line easier to hold, especially on a windy day. They usually have a button or lever to turn the rachet off, turning it into a regular block, allowing lines entering the block move freely in both directions. Ratchet blocks are typically used on small keelboats and dinghies where the mainsheet is and jib sheets are located.

Chock a' block
Refers literally to the situation where pulling on the working line will not raise the load any further because the cheeks of one lifting block are already against the other. Figuratively this has come to mean that something is as full or as far as it can be.[citation needed]