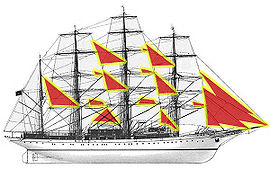 A staysail is a fore-and-aft rigged sail whose luff can be affixed to a stay running forward (and most often but not always downwards) from a mast to the deck, the bowsprit or to another mast.

Most staysails are triangular, however some are four-cornered, notably some fisherman's staysails.

Triangular staysails set forward of the foremost mast are called jibs, headsails or foresails. The innermost such sail on a cutter, schooner and many other rigs having two or more foresails is referred to simply as the staysail, while the others are referred to as jibs, flying jibs etc.

Types of staysail include the tallboy staysail (a narrow staysail carried between the spinnaker and the mainsail on racing yachts), the genoa staysail (a larger one carried inside the spinnaker when broad reaching), and the bigboy staysail (another name for the shooter or blooper, carried on the leeward side of the spinnaker). Unlike the cutter staysail, none of these sails have their luff affixed to a stay.