File:Rigging-lateen-sail.svg
Originally found on sailing ships, the lateen sail is used today in a slightly different form on small boats such as the highly popular Sunfish.

A lateen (from French latine, meaning "Latin"[1]) or latin-rig is a triangular sail set on a long yard mounted at an angle on the mast, and running in a fore-and-aft direction.

Dating back to Roman navigation, the lateen became the favourite sail of the Age of Discovery. It is common in the Mediterranean, the upper Nile, and the northwestern parts of the Indian Ocean, where it is the standard rig for feluccas and dhows. The lateen is used today in a slightly different form on small recreational boats like the highly popular Sailfish and Sunfish, but is still used as a working rig by coastal fishermen in the Mediterranean. 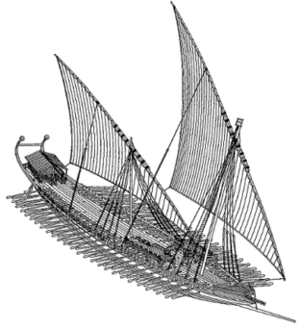 The earliest fore-and-aft rig was the spritsail, appearing in the 2nd century BC in the Aegean Sea on small Greek crafts.[2] The lateen sail originated during the early Roman empire in the Mediterranean Sea.[2][3][4][5][6][7][8][9][10][11][12] It gradually evolved out of the dominant square rig by setting the sails more along the line of the keel rather than athwartship, while tailoring the luff and leech.[13]

Both types of lateen were known from an early date on: a 2nd century AD gravestone depicts a quadrilateral lateen sail (also known as settee), while a 4th century mosaic shows a triangular one which was to become the standard rig throughout the Middle Ages.[2] According to the French maritime historian Basch, the earliest true lateen rig even appears as early as the 1st century BC, in a Hellenistic wall painting of a Hypogeum in Alexandria.[14] The earliest archaeologically excavated lateen-rigged ship, the Yassi Ada II, dates to ca. 400 AD, with a further four being attested prior to the Arab advance to the Mediterranean.[15] The Kelenderis ship mosaic (late 5th to early 6th century)[16][17] and the Kellia ship graffito from the early 7th century complement the picture.[17]

By the 6th century the lateen sails had largely replaced the square sail throughout the Mediterranean, the latter almost disappearing from Mediterranean iconography until the mid-13th century.[18] It became the standard rig of the Byzantine dromon war galley and was probably also employed by Belisarius' flagship in the 532 AD invasion of the Vandal kingdom.[14][19] After the Muslim conquests, the Arabs adopted the lateen sail by way of the Coptic populace, which shared the existing Mediterranean maritime tradition and continued to provide the bulk of galley crews for Muslim-led fleets for centuries to come.[20] This is also indicated by the fact that the terminology of the lateen among Mediterranean Arabs is derived from Greco-Roman nomenclature.[21]

File:Inhambane-dhow.JPG
Dhow with lateen sail in "bad tack" with the sail pressing against the mast, in Mozambique.

Further inquiries into the appearance of the lateen rig in the Indian Ocean and its gulfs show a complete reversal of earlier scholarly opinion on the direction of diffusion, now pointing to an introduction by Portuguese sailors in the wake of Vasco da Gama's arrival in India in 1500.[24] Searches for lateen sails in India were inconclusive.[25] Since lateen sails were absent from Indian inland waters, that is in regions remote from foreign influences, as late as the mid-20th century, the hypothesis of an Indian origin appears a priori implausible.[26] The earliest evidence for the lateen in Islamic art occurs in a 13th century Egyptian artifact which, however, is assumed to show a Mediterranean vessel.[27] Excavated depictions of Muslim vessels along the Eastern African coast uniformly show square sails before 1500.[28]

After 1500, the situation in the Indian Ocean dramatically changes, with nearly all vessels now being lateen rigged.[27] As Portuguese hull design and construction methods are known to have been subsequently adopted by Eastern Muslim shipbuilders, it is assumed that this process also included the lateen rigging of the novel caravel.[29] Within fourteen years of da Gama's arrival, lateens were spotted by the Portuguese on local vessels.[29]

The "V"-shaped and mastless lateen rig, known as crab claw sail, of the seafaring people of the Oceania which was in use as far east as Tonga and Samoa at the time of European contact, is generally assumed to be an independent invention on the grounds of its very different construction.[30]

File:Caravel Boa Esperanca Portugal.jpg
Lateen-rigged caravel, the main vessel of the Portuguese and Spanish long-distance explorations
File:Bermuda rig - 17th Century woodcut.jpg
A 17th Century woodcut of a triangular-sailed Bermudian vessel. Its raked masts were a development of the lateen.

Until the 14th century, the lateen sail was employed primarily on the Mediterranean Sea, while the Atlantic and Baltic (and Indian Ocean) vessels relied on square sails. The Northern European adoption of the lateen in the Late Middle Ages was a specialized sail that was one of the technological developments in shipbuilding that made ships more maneuverable, thus, in the historian's traditional progression, permitting merchants to sail out of the Mediterranean and into the Atlantic Ocean; caravels typically mounted three or more lateens. However, the great size of the lateen yardarm makes it difficult and dangerous to handle on larger ships in stormy weather, and with the development of the carrack the lateen was restricted to the mizzen mast. In the early nineteenth century the lateen was replaced in European ships by the driver or spanker.

However, the lateen survived as a rigging choice for mainsails of small craft where local conditions were favorable. For instance, bargelike vessels in the American maritimes north of Boston, called gundalows, carried lateen rigs throughout the late nineteenth and early twentieth centuries. Likewise, lateen sail survived in the Baltic until the late 19th century. Because the yard pivots on its point of attachment to the mast, the entire sail and yard can be swiftly dropped. This was an advantage when navigating the tidal riverways of the region, which often required passage under bridges.

One of the disadvantages of the lateen in the modern form described below, is the fact that it has a "bad tack". Since the sail is to the side of the mast, on one tack that puts the mast directly against the sail on the leeward side, where it can significantly interfere with the airflow over the sail. On the other tack the sail is pushed away from the mast, greatly reducing the interference. On modern lateens, with their typically shallower angles, this tends to disrupt the airflow over a larger area of the sail.

However, there are forms of the lateen rig, as in vela latina canaria, where the spar is changed from one side to the other when tacking. This way the rig doesn't suffer these airflow disruptions that come from the sail pushed against the mast.

The lateen sail can also be tacked by loosening the yard upper brace, tightening the lower brace until the yard is in vertical position, and twisting the yard on the other side of the mast by a tack. Another way of tacking with a lateen sail is to loosen the braces, lift the yard vertical, detach the sheet and tack, and turn the sail on the other side of the mast in ftont of the mast, and reattach the sheet and tack. This method is described in Björn Landström's The Ship.

The lateen rig was also the ancestor of the Bermuda rig, by way of the Dutch bezaan rig. In the 16th Century, when Spain ruled the Netherlands, the lateen rigs were introduced to Dutch boat builders who soon modified the design by omitting the mast and fastening the lower end of the yard directly to the deck, the yard becoming a raked mast with a full-length, triangular (leg-of-mutton) mainsail aft. Introduced to Bermuda early in the 17th Century, this developed into the Bermuda rig, which, in the 20th Century, was adopted almost universally for small sailing vessels.

The advantage of the lateen rig compared to a square rig is that it rises better towards the wind. A lateen-rigged vessel is far more maneuverable than a square-rigged vessel. The lateen rig also enables tacking and beating to the wind. While a lateen rig is more difficult to tack with than a Marconi or gaff rig, it has a better aspect ratio than square rig.

The disadvantage of the lateen rig is that it is a poorer runner than a square rig. Therefore the Spaniards often re-rigged their vessels when they ventured out of Mediterranean to the Atlantic, where the winds are constant and a square sail has the advantage. 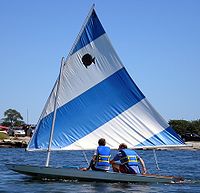 A Sunfish, which uses a modern lateen rig. This Sunfish is rigged improperly, with a twisted boom.

The modern lateen differs from traditional lateens by the addition of a spar along the foot of the sail, similar to the crab claw sail traditionally used on the proa. The lower spar is horizontal, and is attached to the mast where it crosses. The front ends of both spars are joined together. Both joints are designed to allow free rotation in all directions. The sheet is attached to the lower spar, and the halyard to the upper spar. The geometry of the sail is such that the upper and lower spars are confined to a plane parallel to the mast. This results in the sail forming a conic section, identical to half of the Rogallo wing commonly found in kites and hang gliders.

The modern lateen is often used as a simple rig for catboats and other small recreational sailing craft. In its most basic form, it requires only two lines, a halyard and a sheet, making it very simple to operate. Often, additional lines are used to pull down the lower spar and provide tension along the upper and lower spars, providing greater control over the sail shape.

Since the upper and lower spars provide a frame for the sail, the camber of the sail is simply a function of how tightly the spars stretch the sail. This means that lateen sails are often cut flat, without the complex cutting and stitching required to provide camber in Bermuda rig sails. Curved edges, when mated with the straight spars, provide all or nearly all of the sail curvature needed.