From SpottingWorld, the Hub for the SpottingWorld network...
Jump to:navigation, search
For other uses, see Rigging (disambiguation). 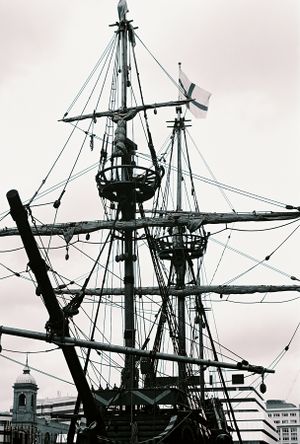 The rigging of a square rigger in London.

Rigging (from Anglo-Saxon wrigan or wringing, "to clothe") is the apparatus through which the force of the wind is used to propel sailboats and sailing ships forward. This includes masts, yards, sails, and cordage.

Rigging is the mechanical sailing apparatus attached to the hull in order to move the boat as a whole. This includes cordage (ropes attached to the spars and sails in order to manipulate their position and shape), sails (aerofoils, usually made of fabric, used to catch the wind), and spars (masts and other solid objects sails are attached to). Cordage is more usually the term for stocks of rope, yarn, or other types line in storage, before it has been put to some use in a vessel, whereafter is commonly referred to as the rigging. In this article, Rigging denotes the full set of cordage, sails and spars, except when it is part of another term (see running rigging and standing rigging).

The term cordage refers to the ropes, called lines, that connect and manipulate sails. Cordage is attached to the spars and sometimes the sails by systems of metal pulleys and clips. The materials chosen for cordage are determined by the strength and weight of the rope. Cordage is divided into two types: running rigging and standing rigging.

Running rigging is the cordage used to control the shape and position of the sails. Running rigging must be flexible in order to allow smooth movement of the spars and sails, but strong enough for the role it plays. For instance, a halyard, used to hoist heavy yards up and down, must be very strong and durable. On the other hand, a sheet, used to control the orientation of a triangular sail, must be very flexible and smooth, and need only be strong enough to support the tension caused by the wind.

Sails are fabric aerofoils designed to catch the wind and manipulate the air currents surrounding the vessel. They are attached to spars and rigging in various ways, such as metal clips, rope hoops, or in a luff-groove. Sails are usually rectangular or triangular in shape, which determines their use and placement. Rectangular sails attached to yards, and hanging perpendicular to the keel line are referred to as square sails, because they are "square" to the keel line (not because of their shape); and this type of sailplan is known as square-rigged. Sails hanging along the keel line at rest are known as "fore-and-aft" sails, and the sailplan as fore-and-aft rig; although when under way both square and fore-and-aft sails can fly at a variety of angles relative to the vessel. Fore-and-aft sails may be triangular (see Bermuda rig), or quadrilateral (see Gaff rig).

Sail material must be durable against weather, lightweight, and non-porous. Common materials include kevlar, twaron, dacron, hemp, and canvas.

Sails are classified according to their shape and location. The name of a sail on a square-rigged vessel with multiple masts consists of the mast name and the sail's vertical position. On a three-masted vessel the masts are, from bow to stern, Fore, Main and Mizzen; the "plain" square sails are, bottom to top, Course, Topsail, Topgallant, Royal and Sky. Thus the sail second up the mizzen-mast is the "mizzen topsail", and the third sail up the fore-mast is the "fore topgallant sail". Sails set in other positions, or only in special circumstances, have a variety of other names, for instance: a triangular sail set on a stay might be called a staysail, or jib if the stay in question runs to the prow or bowsprit; sails set either side of square sails to increase sail area in light winds are called studding-sails, qualified by the side and the plain sail name (such as "port topgallant studding-sail", but more likely to be pronounced "port t'ga'ant stun'sl"); a gaff sail set aft of the mizzen mast may be called a Spanker or Driver.

More detailed information on sail nomenclature and use can be found in Sails and Sail-plan.

Spars are solid or hollow beams used to support and manipulate sails. Masts, yards, booms, gaffs and battens are the most commonly encountered spars. Sails may be attached to the spars by systems of slides, boltropes and hanks designed to allow an appropriate range of motion while maintaining the aerodynamic properties of the sails. Spars can be made of any sufficiently strong material Flexibility and weight are primary concerns for materials; ideally, spars would be sufficiently flexible to allow control over the shape of the sail without being too flexible, as well as lightweight in order to maintain a low and stable center of balance. Spars were traditionally made from wood and later steel, but are now usually aluminium and increasingly from composite materials such as carbon fibre.

Masts are spars firmly attached to the deck of the ship or, more usually, passing through the deck(s) and secured on the keel. They are the main support for the sails, and all but the most speculative sailboats have at least one, generally set along the centreline. The classification of a mast is determined by its position, size and use.

A ship's vertical masts are named, from bow to stern, the fore-mast, the main-mast, the mizzen-mast and the jigger-mast. There may also be a bowsprit possibly extended by a jib-boom, which extends forward past the bow.

Masts carrying rectangular or square sails have horizontal yards to stabilize the top and bottom edges of the sails. These yards can rotate around the mast, allowing the sails to be oriented horizontally, usually up to 45 degrees from perpendicular to the centreline. Some yards can be tilted vertically. Cordage associated with yards includes clew lines, bunt lines, the halyard, and lifts.

Masts carrying triangular sails usually have a horizontal boom to extend the foot of the sail. It is connected to the mast above the deck at the gooseneck, a device designed to allow the boom to pivot about the mast. Cordage associated with booms includes the outhaul, the sheet, the boomvang or kicking strap, and the traveller.

Gaffs are spars attached to the mast in a similar manner to the boom, but hinge vertically. Gaffs "joint" sails, allowing for two smaller sails (one above the gaff and one below) rather than one large, triangular sail. Battens are included within the sail, usually used to extend the roach but also to aid its furling and are found most notably in Chinese junks. Cordage associated with gaffs and battens includes halyards and the gunter line.

On large ships baggywrinkle protects the sail from chafing against the rigging. 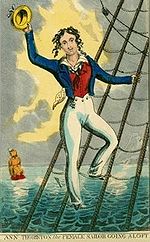