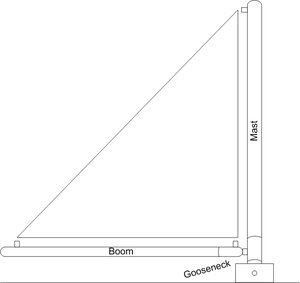 In sailing, a boom is a spar (pole), along the foot (bottom) of a fore and aft rigged sail, that greatly improves control of the angle and shape of the sail. The primary action of the boom is to keep the foot of the sail flatter when the sail angle is away from the centerline of the boat. The boom also serves an attachment point for more sophisticated control lines. Because of the improved sail control it is rare to find a non headsail without a boom. In some modern applications, the sail is rolled up into the boom for storage or reefing (shortening sail).

A boom may be found on small headsails. There the forward end of the boom is attached to the same stay as the sail's luff (forward edge).

Lines on the boom

The control lines (ropes) on the boom act in conjunction with the halyard and leech line to ensure that the sail is trimmed most effectively.

Two primary sail control lines are attached to every boom:

A boom will frequently have these additional sail control lines attached:

Other lines that may found on a boom include:

Traditionally booms, and other spars, were made of wood. Classic wooden hulled sailboats, both old and new, will usually have wooden spars. When aluminium became available, it was adopted for sailboat spars. Aluminium spars are lighter and stronger than their wooden counterpart, require less maintenance and generally hold up better to marine conditions. Aluminum spars are usually associated with fibreglass boats, although you will still find a few early fibreglass hulled yachts that were equipped with wooden spars. On very large sailing vessels, the spars may be steel. Modern, high performance, racing yachts may have spars constructed of more expensive materials, such as carbon fibre.

There are quite a few variations of in-boom furling available. Generally the boom is hollow with a spindle in the center upon which the sail is rolled (furled). The techniques for turning the spindle vary, but frequently a line is used to spin the spindle and recover or reef the sail. In most cases the sail can be full battened and has virtually infinite reefing options. Some sailors consider this approach safer than in-mast furling, since the sail can be lowered and flaked in the traditional method, in the case of mechanical failure. In most applications, the sail can be lowered or reefed from the cockpit. Most designs will not accommodate a loose-footed mainsail.

On an open cockpit sailboat at a mooring, a tarpaulin may be run over the boom and tied to the rails to form a tent over the cockpit.

In certain situations on larger boats, the boom can be used as a crane.

During certain sailing manoeuvres, the boom moves rapidly from one side of the boat to the other. Sailors must take care not to obstruct this movement with their head. Failure to do so can give one insight into the origins of the name boom.