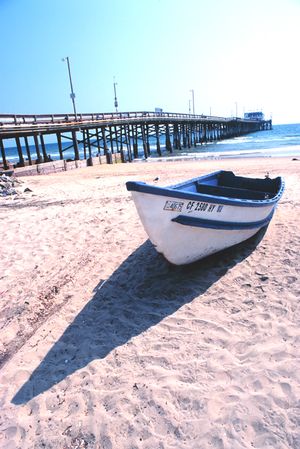 For the fishes known as dories, see dory (fish). For the Greek Spear, see Dory (spear).

The dory is a small, shallow-draft boat, about 5 to 7 metres/16.4 to 23.0 feet long. It is a lightweight and versatile boat with high sides, a flat bottom and sharp bows. They are easy to build because of their simple lines. For centuries, dories have been used for commercial fishing, both in coastal waters and in the open sea. Variant spellings are doree and dori. The British Royal Navy spells it dorey (OED). 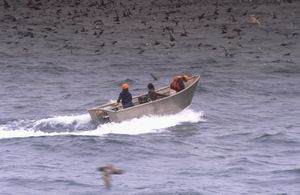 Strictly speaking, the only true defining characteristic of the dory is that it is planked up with wide boards, "It should be well understood, that it is the dory's special mode of construction, not its hull shape, that sets it, and its related sub-types apart from other boats"[1]

More generally speaking, the dory can be defined as a small boat which has:

The hullform is characterized by a bottom that is transversely flat and sometimes bowed fore-and-aft. (This curvature is known as 'rocker'.) The stern is frequently a raked surface (a narrow transom) that tapers sharply toward the bottom forming a nearly double-ended boat. The traditional bottom is made from planks laid fore and aft and not transverse, although some hulls have a second set of planks laid over the first in a pattern that is crosswise to the main hull for additional wear and strength.

Despite their simplicity of design, dories are well known for their seaworthiness and rowing ease. Because of their narrow bottoms, they do not exhibit much initial stability and have often been called 'tippy'. They exhibit high ultimate stability, however, tipping to a point and then stiffening up significantly and resisting further rolling tendencies. Dories by design are quite voluminous and can carry a heavy load for their size and will continue to retain their great ultimate stability even when heavily loaded.

With no clear definition of the type, and no early illustrations or detailed descriptions to go by, the early history of the dory is muddled at best. The first known mention of a dory was in 1719. [1]"Until about 1870, there are to be found no recorded dory lines, details, nor any list of particulars that would enable us to say with certainly what the earlier dories were really like."[3] In its most popular form, the dory was created in New England fishing towns sometime after the early 1700s. Howard Chapelle writes, "... some kind of dory boat was in use on the Massachusetts coast as early as 1726."[4] A definite precursor to the dory type was the early French bateau type, a flat bottom boat with straight sides used as early as 1671 on the Saint Lawrence River.[5]. The common coastal boat of the time was the wherry and the merging of designs between the wherry type and the simplified flat bottom construction of the bateau initiated the birth of the dory. Other antecdotal evidence exists of much older precursors throughout Europe. England, France, Belgium, and Italy all have small boats from the medieval periods that could reasonably be construed to be predecessors of the Dory. [1]

Simeon Lowell in Amesbury Massachusetts is credited with building the first dories around 1793 which he referred to as 'wherries'. What this boat looked like is open to conjecture but from various references it can be inferred to have been a flat bottomed boat. While some assume that this boat followed the Banks dory shape, the Grand Banks cod fisheries for which the Banks dory was designed didn't start operating until the 1830s.[6]

Dories were built all over New England from the Long Island Sound to the shores of Nova Scotia, with major production centers north of Boston, from Massachusetts to the New Hampshire border.

The earliest known dories were beach dories developed for beach launched fishing operations. The principal example is the Swampscott dory, named after Swampscott town where they were introduced. Early wherry types were modified with flat bottoms and borrowed construction techniques found in the French bateaus. This resulted in an almost round sided boat with a narrow flat bottom, well suited to launching through the surf and able to hold up against aggressive ocean conditions. The narrow 'tombstone' transom assured that the boat rode well against a following sea or breaking surf as well as making the boat easy to row.

It is often assumed that the Banks dory was the original dory. In fact, the Swampscott dory preceded the Banks dory by fifty years.[4][7] The Banks dories first appeared in the 1830s and were probably the most numerous at their height of popularity. They were "designed specifically as a ships boat but it became so well known and so common a type that it not only was used alongshore but influenced the design of some local fishing boats"[4]. Adapted almost directly from the low freeboard, french river bateaus, with their straight sides and removable thwarts, bank dories could be nested inside each other and stored on the decks of fishing schooners, such as the Gazela Primeiro, for their trip to the Grand Banks fishing grounds. While a good boat, they are not as handy or easy to row as the slightly more complicated Swampscott dories. They were however, everywhere and cheap insuring their popularity with the locals.

As the need for working dories diminished, the Swampscott or beach dory types were modified for pleasure sailing. These Sailing Dories became quite popular at the beginning of the 1900s around the town of Marblehead. They were generally longer, yet remained narrow with low freeboard and later were often decked over. Another common distinctive feature of the sailing dory was a long boom on the rig that angled up with a mainsail that was larger along the foot than the luff. The Townclass, a sailboat still raced today is a late example of a sailing dory. Earlier types were the Beachcomber and Alpha series, built by the famed dory builder William Chamberlain, and raced extensively in Salem and Marblehead between 1900 and 1910. [8] Few of the original Chamberlain-designed dories remain intact. An original Alpha Dory can be seen at the Marblehead Historical Museum in Marblehead, Massachusetts.[9]

There are other larger power dories, notably the St Pierre dory, about thirty feet long and similar in shape to the Banks dory, and the Boston power dory of Boston Harbor.

Other, less common but traditional types were the double ended surf or Gunning dories. The pointed bow and sterns made these boats excel at launching through the surf. Gunning dories were built quite light in comparison to the more traditionally constructed beach dories.

The "dory skiff" is another variation of the dory type. For inshore work the transom was widened, freeboard was lowered and more rocker introduced into the bottom making an exceptionally easy-to-row boat that was more stable (initial stability not ultimate stability) than their offshore cousins. However they are not as seaworthy as the Swampscott or Banks dories.[11]

These are the principal types of traditional dories produced. There are many more named types but the names typically refer to the same type built one town over. For example, the Cape Ann and Gloucester dories are essentially Banks dories with a centerboard and rig for sailing in local waters.[12] Gloucester was the home port to over 300 fishing schooners at its peak and was the main harbor on Cape Ann. Swampscott can be seen from the breakwater at Gloucester harbor. Essex, Newburyport, Salisbuy, and Amesbury, all big producers of dories, are all towns immediately north of Cape Ann and all have a particular dory 'type' named after them. Differences, if they existed, were minor in nature.

In recent years there has been a resurgence of interest in the dory style. Many contemporary marine architects and backyard amateurs have been experimenting with the dory type and refining the type to some extent. These boats are designed primarily for pleasure and utilize new building materials and techniques not available to the originators of the dory. The basic form remains however ensuring the survival and growth of the type. New England is no longer the center of dory construction and dories have been built all over the world.