From SpottingWorld, the Hub for the SpottingWorld network...
Jump to:navigation, search
File:Traditional Maldivian Dhoni.jpg
The dhoni is the traditional fishing boat of the Maldives.
File:Doni aux Maldives cropped.jpg
A Dhoni without lateen sails. 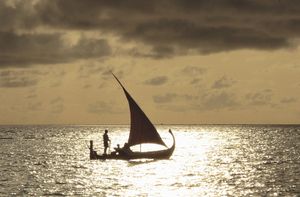 A dhoni with lateen sails.
For the Indian cricketer, see Mahendra Singh Dhoni.

Dhoni or Doni (Dhivehi: ދޯނި pronounced Dōni) is a multi-purpose sail boat with a motor or lateen sails that is used in the Maldives. It is handcrafted and its use within the multi-island nation has been very important. A dhoni resembles a dhow, a traditional Arab sailing vessel.

The traditional dhoni is one of the oldest known sea vessels in the Maldives. Many of these traditional sailing vessels were, of necessity, built using coconut palm timber. The sailing dhoni was used in earlier days by Maldivian fishermen. During the industrial revolution many fisherman changed to a mechanized dhoni.

The Kannada and Konkani word for a small boat is Doni perhaps in keeping with the tradelinks between Arabs and the konkani people in Goa and other port cities in India's konkan and west coast.

The islands of the Maldives have an extensive fleet of fishing boats, built domestically, each of which can carry about eight to twelve persons. Nearly all of these are variants of the dhoni.

In 1995 there were 1,674 registered fishing vessels in the Maldives. Of these, 1,407 were motorised pole and line craft (masdhoni) for tuna fishing in coastal waters, 5 were sailing masdhoni, 48 were mechanised vadhudhoni, 209 were sailing vadhudhoni and 5 were row boats used for trolling in reef waters.[1]

It is a plank-built craft traditionally built with coconut wood, although imported wood from Southeast Asia is increasingly used. Originally sailing craft, nowadays these boats are usually fitted with motors. The main site for building dhonis is in Alifushi Raa Atoll. This boat building is a traditional craft in the Maldives, and young apprentices are trained by skilled craftsmen. Boats crafted from timber take 60 days to complete.