A fishing trawler is a commercial fishing vessel designed to operate fishing trawls. Trawling is a method of fishing that involves actively pulling a trawl through the water behind one or more trawlers. Trawls are fishing nets that are dragged along the bottom of the sea or in midwater at a specified depth. A trawler may also operate two or more trawl nets simultaneously (double-rig and multi-rig).

There are many variants of trawling gear. They vary according to local traditions, bottom conditions, and how large and powerful the trawling boats are. A trawling boat can be a small open boat with only 30 hp or a large factory trawler with 10,000 hp. Trawl variants include beam trawls, large-opening midwater trawls, and large bottom trawls, such as "rock hoppers" that are rigged with heavy rubber wheels that let the net crawl over rocky bottom.

During the 17th century, the British developed the Dogger, an early type of sailing trawler commonly operated in the North Sea. The Dogger takes its name from the Dutch word dogger, meaning a fishing vessel which tows a trawl. Dutch trawling boats were common in the North Sea, and the word dogger was given to the area where they often fished, which became known as the Dogger Bank.[2] Doggers were slow but sturdy, capable of fishing in the rough conditions of the North Sea.[3]

In the Middle Ages, Brixham was a fishing port, and at one time it was the greatest in England. Brixham is famous for being the town where the fishing trawler was improved in the 19th century. Known as the "Mother of Deep-Sea Fisheries", the design of her elegant wooden boats spread across the world, influencing fishing fleets everywhere. Their distinctive sails inspired the song Red Sails in the Sunset which was written aboard a Brixham sailing trawler called the Torbay Lass. In the 1890s there were about 300 trawling vessels there, each usually owned by the skipper of the boat. Several of these old sailing trawlers have been preserved.[4][5] 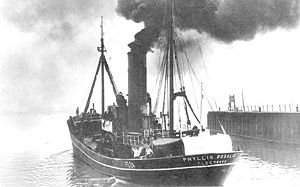 Trawler designs adapted as the way they were powered changed from sail to coal-fired steam by World War I to diesel and turbines by the end of World War II. During World War I and World War II, many fishing trawlers were commissioned as naval trawlers to be used as minesweepers, the activities being similar, with the crew and layout already suited to the task. Since World War II, commercial fishing vessels have been increasingly equipped with electronic aids, such as radio navigation aids and fish finders. During the Cold War, some countries fitted fishing trawlers with additional electronic gear so they could be used as spy ships to monitor the activities of other countries.

The largest fishing port in Europe from the 1970s onwards has been Peterhead in the North-East corner of Scotland. In its prime in the 1980s Peterhead had over 500 trawlers staying at sea for a week each trip. Peterhead has seen a significant decline in the number of vessels and the value of fish landed has been reduced due to several decades of overfishing which in turn has reduced fishing quotas.

Modern trawlers are usually decked vessels. Their superstructure (wheelhouse and accommodation) can be forward, midship or aft. Motorised winches, electronic navigation and sonar systems are usually installed. Fishing equipment varies in sophistication depending on the size of the vessel and the technology used. Design features for modern fishing trawlers vary substantially, as many national maritime jurisdictions do not impose compulsory vessel inspection standards for smaller commercial fishing vessels.[6][7]

Mechanised hauling devices are used on modern trawlers. Trawl winches, such as Gilson winches, net drums and other auxiliary winches are installed on deck to control the towing warps (trawling wires) and store them when not in use.

File:Amandine31.jpg
Depth sounder on the bridge of this (rather dated) trawler.

Modern trawlers make extensive use of contemporary electronics, including navigation and communication equipment, fish detection devices, and equipment to control and monitor gear. Just which equipment will be installed depends on the size and type of the trawler.

Much of this equipment can be controlled from the wheelhouse or bridge. Smaller trawlers have wheelhouses, where electronic equipment for navigation, communications, fish detection and trawl sensors are typically arranged about the skipper's chair. Larger vessels have a bridge, with a command console at the centre and an further co-pilot chair. Modern consoles display all the key information on an integrated display. Less frequently used sensors and monitors may be mounted on the deckhead.[8]

Navigational instruments, such as an autopilot and GPS, are used for manoeuvering the vessel in harbour and at sea. Radar can be used, for example, when pair trawling to keep the correct distance between the two vessels. Communication instruments range from basic radio devices to maritime distress systems and EPIRBs, as well as devices for communicating with the crew. Fish detection devices, such as echosounders and sonar, are used to locate fish.[8]

File:Acoustic trawl sensors.jpg
A net mensurations system using acoustic sensors which measure the depth and opening of the trawl net.

During trawling operations, a range of trawl sensors may be used to assist with controlling and monitoring gear.

Modern trawlers store the fish they catch in some form of chilled condition. At the least, the fish will be stored in boxes covered with ice or stored with ice in the fish hold. In general, the fish are kept fresh by chilling them with ice or refrigerated sea water, or freezing them in blocks. Also, many trawlers carry out some measure of onboard fish processing, and the larger the vessel, the more likely it is to include fish processing facilities. For example, the catch can undergo some preliminary processing by being passed through sorting and washing devices. At a further stage, the fish might be mechanically gutted and filleted. Factory trawlers may process fish oil and fish meal and may include canning plants.

Crew quarters are usually below the wheelhouse and may include bunks, with cot sides to stop the occupant from rolling out in heavy weather. The need for drying sea clothes is shown by a notice in at least one steam trawler's boiler room saying "Do not dry oil frocks over the boiler".[9]

Trawlers can be classified by their architecture, the type of fish they catch, the fishing method used, or geographical origin. The classification used below follows the FAO, who classify trawlers by the gear they use.[10]

Outrigger trawlers use outriggers, or booms, to tow the trawl. These outriggers are usually fastened to, or at the foot of the mast and extend out over the sides of the vessel during fishing operations. Each side can deploy a twin trawl or a single otter trawl. Outrigger trawlers may have the superstructure forward or aft. Warp winches with capstans are installed on the deck to haul the catch.

Outrigger trawlers use vertical fish finders of different kinds, according to their size.[11] Drawing (FAO)

Beam trawlers are a type of outrigger trawler (above), with the superstructure aft and the working deck amidships. They use a very strong outrigger boom on each side, each towing a beam trawl, with the warps going through blocks at the end of the boom. This arrangement makes it easier to stow and handle the large beams. The outriggers are controlled from a midship A-frame or mast. The towing winch is forward of the superstructure, with the towing warps passed through deck bollards and then out to the towing blocks on the booms.

Beam trawling is used in the flatfish fisheries in the North Sea. They are equipped with equipment for hauling the net and stowing it aboard. Typically an echosounder and sonar is used for finding fish.

They are medium sized and high powered vessels, towing gear at speeds up to 8 knots. To avoid the boat capsizing if the trawl snags on the sea floor, winch brakes can be installed, along with safety release systems in the boom stays. The engine power of bottom trawlers is restricted to 2000 HP (1472 KW) for further safety.[12] Drawing (FAO)

Otter trawlers deploy one or more parallel trawls kept apart horizontally using otter boards. These trawls can be towed in midwater or along the bottom. Otter trawlers range in size from sailing canoes to supertrawlers.[13]

Usually otter trawlers have the superstructure forward, though it can be aft or amidship. Gallows are on the stern quarters or there is a stern gantry for operating the otter boards. Pelagic trawlers can use fish pumps to empty the codend.[13]

Pair trawlers are trawlers which operate together towing a single trawl. They keep the trawl open horizontally by keeping their distance when towing. Otter boards are not used. Pair trawlers operate both midwater and bottom trawls.[14]

The superstructure is forward or midships and the working deck aft. Pelagic trawlers can have fish pumps to empty the codend.[14]

Side trawlers have the trawl deployed over the side with the trawl warps passing through blocks suspended from a forward gallow and another aft gallow. Usually the superstructure is towards the stern, the fish hold amidships, and the transversal trawl winch forward of the superstructure. A derrick may be a boom rigged to the foremast to help shoot the codend from the side. Until the late sixties, side trawlers were the most common deep sea boat used in North Atlantic fisheries. They were used for a longer period than other kinds of trawlers, but are now being replaced by stern trawlers. Some side trawlers still in use have been equipped with net drums.[15] Drawing (FAO) 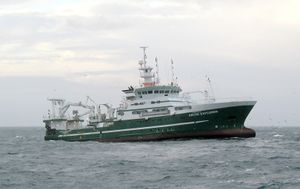 Stern trawlers have trawls which are deployed and retrieved from the stern. Larger stern trawlers often have a ramp, though pelagic and small stern trawlers are often designed without a ramp. Stern trawlers are designed to operate in most weather conditions. They can work alone when midwater or bottom trawling, or two can work together as pair trawlers. The superstructure is forward with an aft working deck. At the stern are gallows or a gantry for operating otter boards.[16] Drawing (FAO)

The majority of trawlers operating on the high seas are freezer trawlers. They have facilities for preserving fish by freezing. They are medium to large size trawlers, with the same general arrangement as stern or side trawlers.[17] Drawing (FAO)

Wet fish trawlers are trawlers where the fish is kept in the hold in a fresh/wet condition, in boxes covered with ice or with ice in the fish hold. They must operate in areas close to their landing place, and the time such a vessel can spend fishing is limited.[18] Drawing (FAO)

Trawler/purse seiners are designed so the deck equipment, including an appropriate combination winch, can be rearranged and used for both methods. Blocks, purse davits, trawl gallows and rollers need to be arranged so they control the pursing lines and warp leads and in such a way as to reduce the time required to convert from one arrangement to the other. These vessels are usually classified as trawlers, since the power requirement for trawling is higher.[19]

During both World Wars some countries created small warships by converting and arming existing trawlers or building new vessels to standard trawler designs. They were typically armed with a small naval gun and sometimes depth charges, and were used for patrolling, escorting other vessels and minesweeping.

Images on board 1960's-type trawler Ross Tiger, now in National Fishing Heritage Centre museum, Grimsby. It is about 126 feet long.