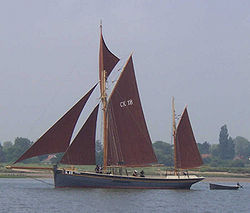 A smack near Brightlingsea
For early longliner smack with well for live fish, see Well smack.

A smack was an English or Atlantic American sailing vessel that was used to bring the fish to market for most of the 19th century and even in small numbers up to the Second World War. The smack was originally cutter rigged, until about 1865 when the smacks became so large that cutter main booms became unhandy. From then on cutters were lengthened and re-rigged and new ketch-rigged smacks were built, but the boats varied from port to port. Some boats had a topsail on the mizzen mast, while others might have a bowsprit carrying a jib. Large numbers of these boats could be seen operating in fleets out of places like Brixham, Grimsby and Lowestoft. In England the sails were usually red ochre in colour, which made them a picturesque sight in large numbers.[1] Smacks were often rebuilt into steam ships in the 1950s. Some of the old smacks have been re-rigged into ketches (or were never made into steam boats) and are now used as training boats for young sailors.