From SpottingWorld, the Hub for the SpottingWorld network...
Jump to:navigation, search
For other uses, see Lugger (disambiguation).
File:Reaper in sail.jpg
The Reaper under full sail.

A lugger is a type of small sailing vessel setting lugsails on two or more masts and perhaps lug topsails.

File:Courbet.jpg
A French lugger, beached and drying nets. The lugsail is spread on the beach. She is beached stern first as is normal. In beach-launched boats, the bow is designed to rise to surf without shipping water or broaching. Painted by Gustave Courbet around 1874.

The main difference between the lugsail and square is the location of the yard in relation to the mast. A square sail is lifted with the halyard in the middle of the yard, lifting the sail so it lies evenly on either side of the mast. In the lugger, the halyard is attached much closer to one end or the other of the yard, and when lifted the majority of the sail will lie fore or aft of the mast. Since the yard is only supported near one end, the "free" end hangs down and the "supported" end peaks up. This allows the mast to be shorter than the sail, the peaked yard making up the difference in height.

The lugsail is somewhat similar to the gaff rig as well, which also uses a spar, the gaff, which is hung at an angle to the mast. The difference is that the gaff is mounted such that it lies entirely behind the mast, as opposed to both in front and behind as in the lugger. While the gaff rig is "cleaner" in that the mast does not interfere with the sail, it requires more complex rigging and handling than the lugger. 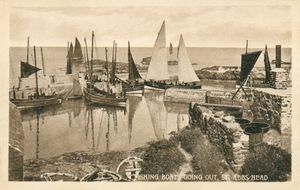 A postcard showing the St. Abbs fishing fleet of Fifies putting to sea.

There are three sorts of lugsail: the standing lug, in which the yard remains on one side of the mast and the tack is set close to the mast, the balance lug (often, incorrectly, balanced lug), which resembles the standing lug, but sets a boom, which continues as far forward of the mast as the leading edge of the yard, and the dipping lug in which the yard is dipped around the mast when going about so that the sail draws away from the mast on each tack.

The advantages of the dipping sail arise from the fact that the set of the sail is not deformed by pressing against the mast. This allows a more efficient air flow and reduces wear of the canvas. Its disadvantage is that with any but a very small sail, a downhaul is needed and the size of the sail which can be manipulated in this way is limited.

When going about, the moment during which it is possible to dip the lug is short and it is not easy to coordinate the efforts of an inexperienced crew. Therefore lugsails on recreational craft are usually standing or balance lugs.

Another source of variation is in the extent to which the yard was designed to be peaked up. That is to say, how nearly vertical the yard was intended to be.

The accompanying picture of Fifies, (above left) a fairly late design in the evolution of the rig, shows one extreme, where the white-sailed boat looks at first glance almost to have a Bermudian rig (although on closer examination, it is clearly a Fifie on the opposite tack). The boat off-shore is a little more obviously a lugger and the others have not got their sails fully set.

The fore lug (main sail) on a Fifie is a dipping lugsail. The extreme size of the dipping lugsail showing in the picture was only possible with the introduction of steam powered capstans to facilitate with dipping.

File:Fifiesmall.gif
A Sailing Fifie, showing the main dipping lug and the mizzen standing lug. This picture of a Fifie more clearly shows the difference in the position of the tack (lower forward corner of the sail) as between a standing lug (here, the mizzen) and dipping lug (here, the main). These yards are shown set to the port sides of the masts.

This short extract explains the procedure:

"Imagine tacking in a fresh breeze with those tremendous forelugs flogging about. First they were lowered down to deck, then unhooked from the traveller, hooked on the burton, swung aft and then for'ard on the other side of the mast, unhooked and rehooked on the traveller, and hoisted again. During this time the mast stood foursquare on its reputation. being completely unstayed until the halyards were unhooked to the weather side and the burton set up. Smart handling was essential, and even with the fall of the haylard taken to the capstan, it was heavy work, but hoisting by hand was back-breaking, five to ten minutes' sweating to get the sail set and drawing properly for most of the old skippers were very particular about the cut and set of their sails." Page 266, Chapter 12 (Fifies and Zulus), Sailing Drifter by Edgar J. March. March also sets out the Cornish method of tacking a lug (pp133 and 146). The Cornish did not drop the sail onto the deck but took the sail forward of the mast. The halyard was started, and as soon as the luff was slack the tack was unhooked. The yard was lowered until it stood vertical with its peak on the deck forward of the mast. The clew was unhooked from the sheet and the sail was handed around the front of the mast to be hooked into the sheet again. Mean while the halyard was swapped over and made ready to raise the sail. As the yard rose, the tack came back down with the yard swinging through the horizontal, until the tack could be hooked back on and the halyard set up tight.

File:Corentin (Chasse-marée).jpg
Le Corentin, a chasse-marée from Quimper. Note the three-masted lugger rig with the foremast stepped well forward, she will have set a jib from the bowsprit which is steeved up in this picture. This permits the use of the boom for loading from fishing boats at sea; without a need to lie alongside. The latter would require almost calm conditions. Here, the sails are brailed and what looks like a mizen boom is topped up. This is not a normal boom but a bumkin, as it carries the lower block of the mizen sheet, so allowing the mast to be stepped right aft, on the raked sternpost. This permits plenty of sail area, while leaving the boat as short as possible for convenience (and lower dues) in harbour. These French standing lugsail yards are slung further forward than on English luggers, so they require the peak halyards visible in this picture.

The rig combines the handiness of a fore and aft rig with much of the efficiency when running, of a square rig. A bigger lugger might set lug topsails which are very much like the lower sails but less deep. Some of the Breton chasse-marées carried topgallants. The standing sail is usually set to the starboard side of the mast. It is said that the comparative disadvantage of having the sail deformed on the starboard tack was why the rule of the road gave the right of way to a sailing vessel in that condition.

Once hoisted, the set of the sail is controlled by adjustment of the tack tackle (pronounced tak taykl) and the sheet. It is therefore much simpler to use than a square sail so that the crew can be smaller or doing work other than that of sailing the vessel, such as that to do with fishing.

The tack tackle is critical to the performance of all lug rigs as it both brings the sail into the correct shape and, in the case of balance and standing lugs is responsible for holding the yard at the correct angle and controlling sail twist.

The lugsail was the earliest of the fore and aft rigs. The origin of its name is not wholly clear. The name 'lugger' may derive from the Middle Dutch for 'to trawl' or it may take its name from the lugsail. That in turn, may have its origin in the similarity of the appearance of a human ear to a fore and aft sail. The French for a fore and aft rig is un gréement aurique or for the sail, it is une voile aurique - an ear type sail. Since 'lug' is an English word for ear, this origin is a possibility.