MS Pride of Portsmouth is a Peter Pan-class cruiseferry operated by P&O Ferries between 1994 and 2005. She was launched on 28 October 1989. Since 2005 she has been operating as the SNAV Lazio with SNAV[1] between Civitavecchia, Palermo and Olbia. She was originally built in 1989 by Schichau Seebeckwerft in Bremerhaven, West Germany as MS Olau Britannia for Olau Line.

Olau Line had been owned by the Germany-based TT-Line since 1979. Under TT-Line ownership, Olau Line had acquired two purpose-built ferries, Olau Hollandia and Olau Britannia for their Sheerness—Vlissingen service.[6] During the mid-80s TT-Line acquired MS Peter Pan (1986) and MS Nils Holgersson (1986), enlarged versions of the Olau Hollandia and Olau Britannia design, for their Trelleborg—Travemünde service. During the latter half of the decade, TT-line decided to order two more ships of the Peter Pan-type from Schichau Seebeckwerft in Bremerhaven, West Germany as replacements for the two Olau ships.[7][8] The second of which was delivered in 1990 as the second Olau Britannia, replacing her older namesake.[2] 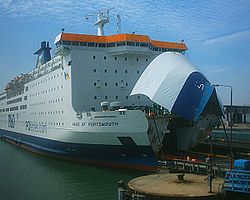 The new Olau Hollandia and Olau Britannia were more than twice the size of the old ships with the same names, and they soon proved to be too large for the route they were built for. Due to high operating costs the ships were taken out of the German ship registry and registered in Luxembourg in January 1993, but action from the German Seamen's Union forced the ships to be re-registered in Germany just a month later. In 1994 TT-Line made plans to move the ships under Bahamian flag, but when the German Seamen's Union protested again, TT-Line decided to close down Olau Line in May 1994.[9][10]

Following the closure of Olau Line, TT-Line chartered the two vessels to P&O European Ferries and the Olau Britannia was consequently renamed Pride of Portsmouth to fit with P&O's branding policy at the time and re-registered to the United Kingdom.[2] Initially both the Pride of Portsmouth and the renamed Pride of Le Havre entered service on the Portsmouth to Cherbourg route whilst new deeper berths were completed at Le Havre.[11] When these were completed, P&O transferred the two to the Portsmouth to Le Havre route on 22 June 1994.[2] This service continued largely unchanged until 2005. [11]

On 28 September 2004 P&O Ferries announced plans to charter the Pride of Portsmouth and her sister Pride of Le Havre to Brittany Ferries. The plans came under scrutiny of the relevant competition regulators, and as a result Brittany Ferries decided not to charter the ships.[12] They remained in P&O Ferries service until 30 September 2005, when they were withdrawn from service and subsequently laid up on the River Fal[2] as this proved to be more cost effective than continuing the service until the end of December. [11]

In November 2005 TT-Line sold the Pride of Portsmouth and Pride of Le Havre to the Italy-based SNAV.[1][2] On 30 December 2005 the Pride of Portsmouth was renamed SNAV Lazio, but she retained United Kingdom flag for the time being. On 5 January 2006 the SNAV Lazio left Falmouth for Naples. On 27 March 2006 she was re-registered in Italy, and in May of the same year she entered service on SNAV's routes from Civitavecchia to Palermo and Olbia.[2][13] 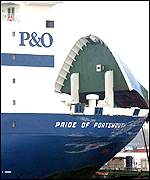 In the early hours of 27 October 2002, during high winds of between 35 to 40 knots and gusts reaching 70 knots within Portsmouth Harbour, the Pride of Portsmouth collided with the warship, HMS St Albans moored at the end of Fountain Lake Jetty during her turn into Fountain Lake.[14] The collision was the result of a combination of factors, most notably the high wind speeds at the time. The Marine Accident Invesitgation Board determined that along with the high winds, an inappropriate helm order and the failure of a bow thruster prior to the incident had allowed the Pride of Portsmouth to pass close to the warship HMS Ocean and then make a starboard turn, which was accelerated by the high winds and lee from HMS Ocean towards HMS St Albans. [14]

The St Albans was at the time, yet to enter full operational service having been commissioned in June 2002. She was substantially damaged in the collision, including several parts of the deck and gun decks, sea boat supports and the port bridge wing. [15]. In comparison, the Pride of Portsmouth sustained only superficial damage including a small gash on her bow. She was consequently taken out of service for repairs to be made. [15]