MS SNAV Sardegna is a cruiseferry owned by the Italy-based SNAV and operated on their Olbia—Civitavecchia and Palermo—Civitavecchia services.[2][4] She was built in 1989 by Schichau Seebeckwerft in Bremerhaven, West Germany as MS Olau Hollandia for Olau Line. From 1994 to 2005 she sailed as MS Pride of Le Havre for P&O ferries.[2]

Olau Line had been owned by the Germany-based TT-Line since 1979. Under TT-Line ownership, Olau Line had acquired two purpose-built ferries, MS Olau Hollandia (1981) and MS Olau Britannia (1982) for their Sheerness—Vlissingen service.[6] During the mid-80s TT-Line acquired MS Peter Pan (1986) and MS Nils Holgersson (1986), enlarged versions of the Olau Hollandia and Olau Britannia design, for their Trelleborg—Travemünde service. During the latter half of the decade, TT-line decided to order two more ships of the Peter Pan-type from Schichau Seebeckwerft in Bremerhaven, West Germany as replacements for the two Olau ships.[7][8] The first of these ships was delivered in 1989 as the second Olau Hollandia, replacing her older namesake.[2]

The second Olau Hollandia was delivered to TT-Line on 29 September 1989, and five days later she entered service on Olau Line's service between Sheerness and Vlissingen.[2] On entering service she replaced the first MS Olau Hollandia (1981).[9] The Olau Hollandia's sister, MS Olau Britannia (1990), followed a year later. In practice the new Olau Hollandia and Olau Britannia proved to be too extravagant for the service, and TT-Line was forced to look into cost-cutting measures to keep the ships running.[6] On 6 January 1993 the Olau Hollandia was re-registered to Luxembourg, but after a series of strikes and other protests in part of the German seamen's trade union, TT-Line were forced to return the ship into German registry on 3 February 1993. Subsequently TT-Line drew up plans for swapping the Olau ships with the ships in Trelleborg—Travemünde service, and moving the resulting new Olau ships into Bahamian registry. Another strike onboard the Olau ships followed, and in May 1994 TT-Line decided to close down the Olau Line brand entirely, with the Olau Hollandia and Britannia chartered to P&O Ferries. The Olau Hollandia made her last sailing for Olau Line on 15 May 1994.[2] 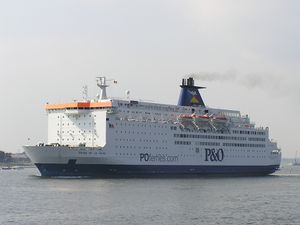 While outbound from Le Havre on the evening 27 July 1998, the Pride of Le Havre suffered a switchboard explosion in the engine room, resulting in a fire in the engine room and loss of electrical power through-out the ship. Three members of the crew were seriously injured in the explosion. After the fire had been extinguished and power restored, the ship returned to Le Havre with the assistance of two tugs. The injured crewmen were transported to a local hospital, where the most seriously injured crewman died five days later. After unloading the injured crewmen the Pride of Le Havre sailed to Portsmouth, where she arrived early the next morning. In Portsmouth all passengers and cargo were unloaded and the ship itself was subsequently repaired.[5] On 18 March 1999 the ship suffered another engine room fire. This time repairs were carried out in Southampton, and the ship was back in service on 24 March 1999.[2]

On 28 September 2004 plans to charter the Pride of Le Havre and her sister Pride of Portsmouth to Brittany Ferries were made public. The plans came under scrutiny of the relevant competition regulators, and as a result Brittany Ferries decided not to charter the ships.[11] They remained in P&O Ferries service until 30 September 2005, when they were withdrawn from service and subsequently laid up on the River Fal.[2]

In November 2005 TT-Line sold the Pride of Le Havre and Pride of Portsmouth to the Italy-based SNAV.[1][2] On 30 December 2005 the Pride of Le Havre was renamed SNAV Sardegna, but she retained United Kingdom flag for the time being. On 5 January 2006 the SNAV Sardegna left Falmouth for Naples. On 27 March 2006 she was re-registered in Italy, and in May of the same year she entered service on SNAV's routes from Civitavecchia to Palermo and Olbia.[2][4]