SS Imperator was an ocean liner built for the Hamburg Amerikanische Packetfahrt Actien Gesellschaft (HAPAG) (English: Hamburg America Line) launched in 1912. She was the first of a trio of successively larger Hamburg America ships that included SS Vaterland and SS Bismarck built by the line for transatlantic passenger service. At the time of her launch in May 1912, she was the largest passenger ship in the world superseding the RMS Olympic.

During World War I, the ship remained in port in Hamburg. After the war she was briefly commissioned into the United States Navy as USS Imperator (ID-4080) and employed for returning American troops from Europe. Following her U.S. Navy service, Imperator was handed over to Britain's Cunard Line as part of war reparations, and she sailed as the flagship RMS Berengaria for the final decade of her career.

The first plates of her keel were laid in 1910 at the Vulcan Shipyards in Hamburg, Germany, and made her maiden voyage in 1913. At 51,680 gross tons, Imperator was the largest ship in the world until Vaterland sailed in 1914.[1]

Before her launch on 23 May 1912, Cunard announced that their new ship, RMS Aquitania, which was under construction at the time at the John Brown shipyards in Glasgow, would be longer by one foot. There was an instant uproar in Hamburg. Several Weeks later, she was fitted with a large bronze eagle created by Professor Bruno Kruse of Berlin which graced her forepeak with a banner emblazoned with HAPAG's motto Mein Feld ist die Welt (English: My field is the world). The eagle's wings were later torn off in an Atlantic storm during the 1914 season, after which it was removed and replaced with gold scrollwork which was similar to what was on her stern.

On her initial sea trials the ship ran aground (similar to the Queen Mary's first journey) on the Elbe river due to insufficient dredging and a flash fire in the engine room which resulted in eight crewmen being taken to hospital, on her official trials she suffered overheating of the turbines and some stability issues were discovered so, the trials were abandoned and the builders were called in for emergency work, at this time the overnight cruise for the Kaiser was cancelled and eventually carried out in July that year.

Imperator left on her maiden voyage on Tuesday, 10 June 1913 with Commodore Hans Ruser in command and Hamburg-Amerika appointing four other captains for the journey to make sure that everything went smoothly, on the way she stopped at Southampton and Cherbourg before making her way across the Atlantic to New York, arriving on 19 June 1913. On board were 4,986, consisting of 859 first-class passengers, 647 second-class passengers, 648 third-class passengers, 1,495 in the steerage, and 1,332 who were crew.[2] The ship returned to Europe from Hoboken, New Jersey on 25 June 1913.[3]

On her first arrival the harbour pilot assigned to bring her into the Ambrose channel, Captain George Seeth noted that the ship listed from side to side when the helm made changes to the ships direction and she was soon nicknamed "Limperator". Imperator returned to the Vulkan shipyard in October 1913 to carry out drastic stability work to improve the handling as this had been discovered that the centre of gravity for the ship was too high (see metacentric height). In order to correct the problem and lower the ships centre of gravity all the marble bathroom suites in first class were removed and all of the heavy furniture was replaced with lightweight wicker cane, her funnels were reduced in height by three metres and finally 2000 tons of cement was poured into the ships double bottom to cure the vessels seaworthiness issues, this work cost £200,000 which had to be bourne by the shipyard as part of their five year warranty to the shipowners, at the same time an advanced fire sprinkler system was fitted throughout the ship after several fires had occurred on board since the vessel had entered service.

During the 1914 refit of Imperator Commodore Ruser handed over command of the ship to Captain Theo Kier and left to take command of the new larger flagship Vaterland which was nearing completion. Imperator returned to service on 11 March arriving at New York five days later on the 19th.

Among her luxurious features, Imperator introduced a two-deck-high, Pompeiian-style swimming pool for her first-class passengers.

In August 1914, as World War I began, she was laid up at Hamburg and remained inactive for more than four years where she had fallen into a dilapidated state. Following the 11 November 1918 Armistice, Imperator was taken over by the Allied Food Shipping and Finance Agreement, and allocated to the United States for temporary use as a transport alongside Vaterland now renamed USS Leviathan bringing American service personnel home from France.[4]

She was commissioned as USS Imperator (ID-4080) in early May 1919 under Captain Casey. After embarking 2,100 American troops and 1,100 passengers, Imperator departed Brest, France on 15 May 1919, arriving at New York City one week later. Operating with the Cruiser and Transport Force from 3 June to 10 August, she made three cruises from New York to Brest, returning over 25,000 troops, nurses, and civilians to the United States.

While en route to New York City 17 June, Imperator assisted the French cruiser Jeanne d'Arc, which had broken down in the Atlantic Ocean. The President of Brazil was on board Jeanne d'Arc and Imperator received him and his party for transport to the United States, arriving there several days later.

Decommissioned at Hoboken, New Jersey in early 1919, Imperator was transferred to the British shipping controller on 20 September and it was decided that she would operated by Cunard. Captain Charles A. Smith and a full crew was sent out to New York on the Carmania by her new operators and the official handover from the American board of shipping to Cunard took place on November 24 where the vessel was officially received by Cunards Marine superintendent Captain Miller accompanied by his assistant Captain Palfrey. Imperator was then transferred to Cunards pier 54 for Cunard service.

The ship arrived at Southampton on Sunday 10 December 1919 and then proceeded to Liverpool for what was planned to be a quick overhaul (she was scheduled to leave on her first voyage for her new owners on 10 January, 1920). However, upon inspection, ship was found to be in a poor condition. During the dry docking on 6 January it was found that the ships rudder had a piece missing and her propellers were suffering from erosion on their leading edges. These issues were attended to while the ship was re-furnished with items borrowed from the Cunard vessels Transylvania and Carmania.[5]

Due to the extent of the work that had to be carried out, Imperator remained at Liverpool until the 21 February and during this time the company's annual dinner was held on board, before the ship returned to service on the North Atlantic.[5]

On the 2 March 1920 the ship left New York and took nine days to reach Southampton. During the voyage Imperator developed a severe list which was found to be caused by a faulty ash ejector. At this point Cunard decided that the ship was in need of a major overhaul and was withdrawn from service.[5]

The ship was named after Queen Berengaria, the wife of Richard the Lionheart. Many Cunard ships had been named for parts of the Roman Empire and had names that ended in "ia". RMS Berengaria, like many, but not all, Cunard ships, kept the "ia" ending to her name but, like several Cunard ships before and after, was not named after a province of the ancient world. 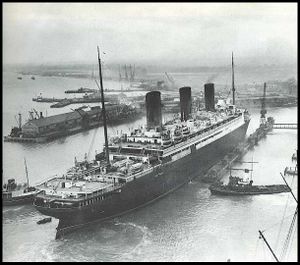 RMS Berengaria in her glory.

Sir Arthur Rostron of the RMS Titanic passenger rescue fame and former captain of Carpathia took command of Berengaria on July 1920. The following year both Berengaria and Aquitania were sent to Armstrong Whitworth shipyards to be converted from coal fired to oil.[5]

In May 1934 Berengaria was in the headlines when she ran aground on the mud banks at Calshot on the Solent. She was pulled free from the mud by four Southampton tugs. The vessel suffered no damage and the incident did not affect her sailing schedule.[5][6]

Despite her German heritage, Berengaria served as flagship of the Cunard fleet until she was replaced by her sister ship, Majestic - ex-Bismark, in 1934 after the merger of Cunard with White Star Line.[6] In later years, she was used for discounted prohibition- dodging cruises, which earned her the unfortunate nickname "Bargain-area".

Towards the end of her service life, she suffered several electrical fires caused by aging wiring and Cunard-White Star opted to retire her in 1938. She was sold to Sir John Jarvie, who also purchased Olympic, to provide work for his local region.[6] She sailed for the River Tyne under the command of Captain George Gibbons and scrapped down to her waterline. Final demolition took place in 1946.