RMS Aquitania was a Cunard Line ocean liner built by John Brown & Company in Clydebank, Scotland. She was launched on 21 April 1913[4] and sailed on her maiden voyage to New York on 30 May 1914. Aquitania was the third in Cunard Line's "grand trio" of express liners, preceded by the RMS Mauretania and RMS Lusitania, and was the last surviving four funnelled ocean liner.[5] Widely considered one of the most attractive ships of her time, Aquitania earned the nickname "Ship Beautiful".[3] This despite criticism of her looks; having too many cowl ventilators and the forward funnel being as close to her bridge as it was is an interesting concept.

In her 36 years of service, Aquitania survived military duty in both world wars and was returned to passenger service after each war. Aquitania's record for the longest service career of any 20th century express liner stood until 2004, when the Queen Elizabeth 2 (ultimate career service of 40 years) became the longest-serving liner.

The origins of Aquitania lay in the rivalry between the White Star Line and Cunard, Britain's two leading shipping companies. White Star's Olympic and Titanic were larger than the latest Cunard ships Mauretania and Lusitania by 15,000 gross tons. The Cunard duo were significantly faster than the White Star ships, while White Star's ships were seen as more luxurious. Cunard needed another liner for its weekly transatlantic express service, and elected to follow White Star with a larger, slower, but more luxurious ship.[3]

The Aquitania was designed by Cunard naval architect Leonard Peskett.[3] Peskett drew up plans for larger and wider vessel than his two previous large Cunard ships Lusitania and Mauretania. With her four large smokestacks she would resemble the famous speed duo but also Peskett designed her superstructure with "glassed in" touches from the smaller Carmania, a ship he also designed. Another design feature from Carmania was the addition of two tall forward deck ventilator cowlings. With Aquitania's keel being laid down at the end of 1910, the experienced Peskett took a voyage on the rival Olympic in 1911 so as to experience the feel of a ship reaching nearly 50,000 tonnes as well as to copy pointers for his company's new vessel. Though the Aquitania was built solely with Cunard funds, Peskett nevertheless designed her to strict Admiralty specifications "just in case of a war". Aquitania was built in the John Brown and Company yards in Clydebank, Scotland,[4] where the majority of the Cunard ships were built. Her keel was laid in the same plot that had famously served building Lusitania and that would later be used for building Queen Mary, Queen Elizabeth & the QE2.[6] In the wake of the Titanic disaster, Aquitania was one of the first ships to carry enough lifeboats for all passengers and crew.[3] Two of these lifeboats were motorised launches with Marconi wireless equipment. As required by the British Admiralty, she was designed to be converted into an armed merchant cruiser, and was reinforced to mount guns for service in that role. Aquitania was launched on 21 April 1913 after being christened by Alice Stanley, the Countess of Derby, and fitted out over the next thirteen months. In May 1914 she was tested in her sea trials and steamed at one full knot over the expected speed.

Although the Aquitania lacked the lean, yacht-like appearance of her running mates—the Mauretania and Lusitania—her greater length and wider beam allowed for grander and more spacious public rooms. Her public spaces were designed by the British architect Arthur Joseph Davis of the interior decorating firm Mewès and Davis. This firm had overseen the construction and decoration of the Ritz Hotel in London and Davis himself had designed several banks in the capital. His partner in the firm, Charles Mewès, had designed the interiors of the Paris Ritz and had been commissioned by Albert Ballin, head of Germany's Hamburg-Amerika Line (HAPAG), to decorate the interiors of the company's new liner, the Amerika in 1905. In the years prior to the First World War, Mewès was charged with the decoration of HAPAG's trio of giant new ships, the SS Imperator, SS Vaterland and SS Bismarck, while Davis was awarded the contract for the Aquitania. In a curious arrangement between the rival Cunard and Hamburg-Amerika Lines, Mewès and Davis would work apart—in Germany and England respectively and exclusively—with neither partner being able to disclose details of his work to the other. Although this arrangement was almost certainly violated, the interiors of the Aquitania were largely the work of Davis. The Louis XVI dining saloon owed much to Mewès' work on the HAPAG liners, but it is likely that having worked so closely together for many years the two designers' work had become almost interchangeable. Indeed, Davis must be given credit for the magnificent Carolean smoking room and the fautless Palladian lounge; a faithful interpretation of the style of the architect John Webb.

Early career and World War I

30 May 1914 saw the Aquitania sail on her maiden voyage under the command of Captain William Turner.[1] This momentous event was however overshadowed by the sinking of the RMS Empress of Ireland in Quebec the previous day on 29 May with over a thousand drowned. The following month the Archduke Franz Ferdinand of Austria was assassinated and the world was plunged into World War I, interrupting Aquitania's civilian career. After only three round trips she was taken over for military use. At first she was converted into an armed merchant cruiser, for which provision had been made in her design. However, the Admiralty found that large liners were too profligate in their use of fuel to serve as cruisers, so Aquitania did not serve long in that role.[3] After being idle for a time, in the spring of 1915 she was converted into a trooper, and made voyages to the Dardanelles. She then was converted into a hospital ship, and served in that role in the Dardanelles campaign.[1] In 1916, she was returned to the trooping front, and then in 1917 was again laid up.[1] In 1918, she was back on the high seas in troopship service, conveying North American troops to Britain. Many of these departures were from the port of Halifax, Nova Scotia where her spectacular dazzle paint scheme was captured by artists and photographers, namely Antonio Jacobsen. On one occasion she transported over 8,000 men.

In June 1919, she ran a Cunard "austerity service" between Southampton and New York. In December of that year Aquitania was docked at the Armstrong Whitworth yards in Newcastle to be refitted for post-war service. She was converted from coal burner to oil-fired, which greatly reduced the number of crew needed in her engine room.[1] (One crew member was killed in an explosion in her engine room during her conversion work), Her original fittings and art pieces were brought out of storage and reinstalled.

During the 1920s Aquitania became one of the most popular liners on the North Atlantic route. She sailed with the Cunarders Mauretania and Berengaria in a trio known as "The Big Three."[3] As times grew better, Aquitania grew into the role of being one of the most profitable ocean liners ever. The American restriction on immigration in the early Twenties ended the age of mass emigration from Europe, but as ocean travel was the only means of transportation between the continents, the ocean liners survived and even surpassed old records. Some of the big money now came in from movie stars and royalty, other aristocracy and politicians. Aquitania became their favorite, as the 1920s became one of the most profitable ages in ocean travel history.

However following the stock market crash of 1929 many ships were affected by the devastating consequences. Aquitania found herself in a tough position. Only a few could afford expensive passage on her now, so Cunard sent Aquitania on cheap cruises to the Mediterranean. These were successful, especially for Americans who went on "booze cruises," tired of their country's prohibition. On 10 April 1935 Aquitania went hard aground near Thorne Knoll on the River Test outside Southampton, England but with the aid of ten tugboats and the next high tide she was freed.[1] 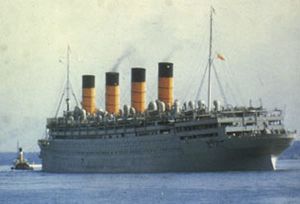 1946 The Aquitania in her twilight years, sporting her wartime grey with traditional Cunard funnels.

As time went on Aquitania grew older and was scheduled to be replaced by RMS Queen Elizabeth in 1940. This plan was shattered with the coming of World War II. In 1940 Aquitania was in New York awaiting further orders. For a time she was tied up alongside RMS Queen Mary, the Queen Elizabeth, and the Normandie and the four ships made an impressive sight amongst large liners. Shortly after Aquitania sailed for Sydney, Australia, in her Cunard colours, to become a troop transport.Aquitania served valiantly as a troop transport, just as she had in World War I. Later in 1940 Aquitania, Queen Mary, Queen Elizabeth, SS Ile de France and other ships sailed in a magnificent convoy out of Sydney, Australia.[1] In November 1941 Aquitania was in Singapore (then still a British colony) now repainted in battleship grey set sail to take part indirectly in the loss of the Australian cruiser HMAS Sydney. The Sydney had engaged in battle with the German auxiliary cruiser Kormoran. There has been much unsubstantiated speculation that Kormoran was expecting Aquitania, after spies in Singapore had notified Kormoran's crew of the liner's sailing, and planned to ambush her in the Indian Ocean west of Perth but instead encountered Sydney on 19 November. Both ships were lost after a fierce battle and a short time later Aquitania arrived on the scene to pick up survivors of the German ship, the captain going against orders not to stop for survivors of sinkings.[1] There were no survivors from the Sydney. In her eight years of further military work, Aquitania sailed more than 500,000 miles, and carried nearly 400,000 soldiers,[1] to and from places as far afield as New Zealand, Australia, the South Pacific, Greece and the Indian Ocean.

File:RMS Aquitania Mural.png
Mural of the Aquitania, the "Ship Beautiful."

After completing troopship service, she was handed back to Cunard in 1946, who used her to transport war brides and their children to Canada under charter from the Canadian government. This final service created a special fondness for Aquitania in Halifax, Nova Scotia, the port of disembarkation for these immigration voyages. On completion of that task in December 1949, she was taken out of service when her Board of Trade certificate was not renewed as the condition of the ship had reached a stage where she was too old to be economical and brought in to line with safety standards of the day. By 1949 as mentioned in Cunard commodores Harry Grattidge's autobiography "Captains of the Queens" that the ship had deteriorated considerably with age and her decks leaked in foul weather and a piano had fallen through the roof of one of the dining rooms during a corporate luncheon being held on the ship from the deck above. This truly signalled the end of Aquitania's operational life. The vessel was retired and scrapped in 1950 in Scotland,[1] thus ending an illustrious career which included steaming 3 million miles in 450 voyages. Aquitania carried 1.2 million passengers over a career that spanned nearly 36 years, making her the longest serving Express Liner of the 20th Century. She was the only major liner to serve in both World Wars, and she was scrapped as the last four funnelled passenger ship. Her wheel and a detailed scale model of Aquitania may be seen in the Cunard exhibit at the Maritime Museum of the Atlantic in Halifax.