The Greycliffe disaster occurred in Sydney Harbour (Australia) on 3 November 1927 when the harbour ferry Greycliffe and the Union Steamship Company mail steamer Tahiti collided. The smaller ferry was cut in two and sank with the loss of 40 lives, the deadliest incident on Sydney Harbour.[1]

Greycliffe left Circular Quay, Sydney's main ferry terminus, at 4.15pm on Thursday 3 November 1927, with 120 passengers on board, including school children returning home. The ferry stopped at Garden Island to pick up dock workers, and then resumed its journey on a course that would have taken it just north of the lighthouse near Shark Island. Its remaining intended stops were to be Nielsen Park, Parsley Bay, Central Wharf (near The Crescent), and Watsons Bay. On roughly the same course, however, was the Union Steamship Company's outward-bound trans-Pacific Royal Mail Steamship 7,585 ton Tahiti, three times the size of Greycliffe. Greycliffe was ahead and to the right of the Tahiti.

At about half-way between Garden Island and Bradleys Head, Tahiti's bows struck Greycliffe midships on its port side. The small ferry was pushed around perpendicular to the large steamer's bow, and momentarily was pushed along. The ferry began to overturn, and was broken in two, and the steamer sailed through the ferry, which sank immediately. Passengers who were sitting outside had an easier chance to live, while those inside the two cabins—a ladies-only saloon, and a smoking room for men—were trapped. A number of other boats on the harbour witnessed the collision and rescued survivors from the water.

Several days later, smashed hull sections were towed to Whiting Beach near Taronga Zoo and divers looked for missing bodies. Seven of the forty killed were under the age of twenty, including a two-year old boy who died along with his grandparents. Most of the victims came from the ferry's intended destination, the small Sydney suburb of Watsons Bay. 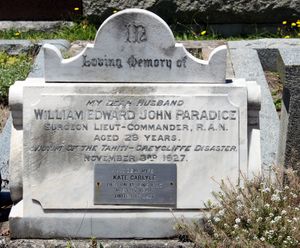 A total of forty dead was relative small number in comparison to more infamous maritime accidents in history, however, the tragedy stunned people because of its swiftness and horror. The weather and sea were calm, with high visibility.[1]

Greycliffe's design was identified as flawed with the wheelhouse offering no clear view of ships coming from behind. Most witnesses, including other ferry captains, agreed that the Tahiti was going too fast and that the Greycliffe, inexplicably, had turned sharp left into its path. Greycliffe's captain, William Barnes, survived and claimed he had not consciously strayed from his course, and that he had not seen the Tahiti until it was too late. He claimed that a few minutes from Garden Island, he felt the ferry pull to port, which he blamed on a problem with the steering mechanism for which he compensated."[2]

The pilot on board the Tahiti, Sydneysider Thomas Carson, said he saw the ferry swing left towards the ship, and he ordered the engines astern and a changed course. Carson and his family, who unlike Barnes, lived in Watsons Bay, along with many of the victims' families became persona non grata by some members of the community according to Steve Brew.[2] Blaming Carson, Sydney Ferries had "the bow theory", which stated that when a large and a small vessel were on parallel courses in shallow water, and with the larger vessel travelling faster, its bow wave could drag the smaller vessel into the larger one.[2]

A Marine Court of Inquiry, formal Inquest, and Admiralty Court of Inquiry gradually shifted blame for the disaster from Tahiti's pilot, Captain Thomas Carson, to the ferry master, William Barnes, and the probable failure of Greycliffe's steering gear that allowed her to swing off course and into the path of a liner.[2] The coronial inquest and the Admiralty Court dismissed the bow theory and accepted that, even though the Tahiti was going too fast, the collision wouldn't have occurred had not the Greycliffe turned into its path. A verdict was handed down by the final court of appeal in 1931, which concluded that while both captains were guilty of contributory negligence, the "Greycliffe's navigator" was twice as culpable as Carson.

Using the transcripts of the inquiries, Brew believes Carson's reputation was unfairly tainted, in particular by Justice James Lang Campbell, the Supreme Court judge appointed to preside over the initial marine inquiry.[2] Campbell accepted evidence from witnesses that the Tahiti was probably travelling at 12 knots (22 km/h) instead of the permitted eight knots. However, he refuted evidence from the same witnesses that the Greycliffe had turned directly into the path of the Tahiti.[2]

Sinking of the Tahiti

In August 1930, the Tahiti punctured her hull with her propeller shaft, between Wellington and Rarotonga. She wallowed for three days before sinking without loss of life.

The only part of the Greycliffe to survive is the ships engine. In 1928 it was shipped to New Zealand and installed into the Tirau dairy factory in the Waikato region. A large grooved 2 metre flywheel was fitted to the crankshaft. By using continuous rope belts, the engine drove ammonia compresors and butter churns. After 40 years service, it was donated to the Museum of Transport and Technology in Auckland and was installed as a working exhibit over the next four years.