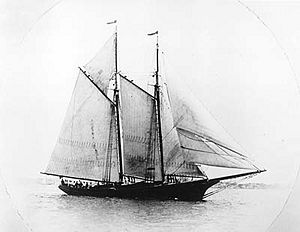 A fore-and-aft rig is a sailing rig consisting mainly of sails that are set along the line of the keel rather than perpendicular to it. Such sails are described as fore-and-aft rigged.

Similar phrases in other languages

"Fore and Aft" is distinctly English maritime phraseology, but the Dutch (or Afrikaans) equivalent is 'voor en achter', with a similar meaning.

"Fore and Aft Rig" is a nickname for a kind of Royal Navy uniform with a conventional jacket, shirt and tie and peaked cap rather than jumper, bell bottom trousers and round hat (known as square rig). Fore and Aft Rig is worn by all officers, warrant officers, chief petty officers and petty officers. It was once also worn by junior ratings who did not belong to seaman or engine room branches (e.g. artificer apprentices, medical personnel, administrative personnel, cooks, stewards etc), although they too have now worn square rig for many years.