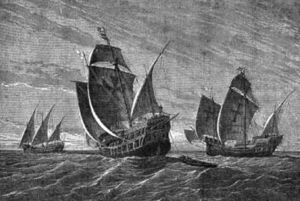 Columbus' ships (G.A. Closs, 1892): The Santa Maria and the Niña are shown as carracks, to the left the caravel Pinta

A carrack or nau was a three- or four-masted sailing ship developed for use in the Atlantic Ocean in the 15th century by the Portuguese. It had a high rounded stern with an aftcastle and a forecastle and bowsprit at the stem. It was square-rigged on the foremast and mainmast and lateen-rigged on the mizzenmast.

Carracks were ocean-going ships: large enough to be stable in heavy seas, and roomy enough to carry provisions for long voyages. They were the ships in which the Portuguese and the Spanish explored the world in the 15th and 16th centuries. In Portuguese this type was called nau, while in Spanish it is called carraca or nao (both of which meant simply "ship"). In French it was caraque, caravelle or nef.

As the forerunner of the great ships of the age of sail, the carrack was one of the most influential ship designs in history.[citation needed]

By the late Middle ages the cog and cog-like square-rigged vessels, were widely used along the coasts of Europe, in the Baltic, and also in the Mediterranean. Given the conditions of the Mediterrenean, but not exclusively restricted to it, galley type vessels were extensively used there, as were various two masted vessels, including the caravels with their lateen sails. These and similar ship types were familiar to Portuguese navigators and shipwrights. As the Portuguese gradually extended their explorations and trade ever further south along Africa's Atlantic coast during the 15th century they needed a larger and more advanced ship for their long oceanic adventures. Gradually, they developed the carrack [1] from a fusion and modification of aspects of the ship types they knew operating in both the Atlantic and Mediterranean and a new, more advanced form of sail rigging that allowed much improved sailing characteristics in the heavy winds and waves of the Atlantic ocean.

A typical three-masted carrack such as the São Gabriel had six sails, namely bowsprit, foresail, mizzen, spritsail, and two topsails.

From around 1515, Portugal had trade exchanges with Goa in India, consisting of 3 to 4 carracks leaving Lisbon with silver to purchase cotton and spices in India. Out of these, only one carrack went on to China in order to purchase silk, also in exchange for Portuguese silver.

From the time of the acquisition of Macau in 1557, and their formal recognition as trade partners by the Chinese, the Portuguese Crown started to regulate trade to Japan, by selling to the highest bidder the annual "Captaincy" to Japan, in effect conferring exclusive trading rights for a single carrack bound for Japan every year. That trade continued with few interruptions until 1638, when it was prohibited on the grounds that the ships were smuggling priests into Japan.

By the end of the 16th century the carrack had been further developed into the galleon. The hull was elongated, the forecastle lowered and set backwards to present less resistance to the wind, and the stern streamlined. These changes increased speed and allowed the vessel to go higher against the wind.[2] Carracks, however, continued to be used well into the 17th century.