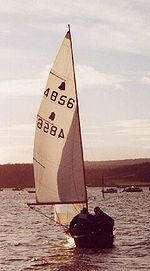 The GP14 is a 4.2m (14 ft) sailing dinghy developed in 1949. over 14,000 GP14s have been built and the class is active in the UK, Ireland, Australia, South Africa and Sri Lanka. It is relatively heavy (133 kg) but stable, and an ideal boat to learn to sail in. It is also raced competitively, and offers good close racing.

A number of owners also cruise the boats, and cruises have ranged from the gentlest day sailing to such ambitious undertakings as crossings of the English Channel and the Irish Sea. [1] An active Class Association supports both racing and cruising activities.

The idea behind the design was to build a General Purpose (GP) 14-foot dinghy which could be cruised, raced and rowed equally well. It can also be powered effectively by a small outboard motor. In the early 1990s a new internal layout was introduced in the wooden boats (the "Series 2"), with built-in underfloor buoyancy. Also in the late eighties and early nineties underfloor buoyancy was introduced to the plastic (FRP) boats, and the internal layout of these boats underwent several stages of modernisation.[2]

This was further modified over the following years, led by boat builders Alistair Duffin, who builds in wood, and Holt Allen, now Speed Sails Ltd, who manufacture in GRP (glass-reinforced plastic) and FRP. New boats are currently available in wood, GRP and FRP.

Both the two most recent GP14 World Championships, held at Sligo, Ireland, in July/August 2006, and at Abersoch, UK in August 2008, attracted entries of over 110 boats.

People often wonder why the class symbol is a bell. This is alleged to be because the boat's designer, Jack Holt, designed it whilst in Aberdyfi, Wales, and it is a reference to the legendary bells of Cantre'r Gwaelod. A more likely explanation, however, is that it relates to the original manufacturer, Bell Woodworking, who also produced the Bell Seagull and Seamew cruisers. Jack Holt had a long association with Bell Woodworking of Leicester, who also built and sold kits for many of his designs including: GP14 (which bears their insignia), Mirror Dinghy, Miracle and Mirador cruising yacht.