Sunfish was developed by Alcort, Inc. and first appeared around 1952 as the “next generation” improvement on their original boat, the Sailfish. In contrast, the Sunfish has a wider beam for more stability, increased freeboard and the addition of a foot-well for a more comfortable sailing position. Sunfish began as a wood hull design and progressed to fiberglass construction just a few years after its introduction.[2]

Having a lateen sail with its simple two line rigging makes a Sunfish simple to learn sailing on and to set up. Upgrades can be added to enhance sail control for competitive sailing,[3] making the boat attractive to both novice and experienced sailors alike.

Due to the broad appeal of the Sunfish, in 1995 it was commended by The American Sailboat Hall of Fame for being “the most popular fiberglass boat ever designed, with a quarter million sold worldwide” (at that point in time).[4] Today, the Sunfish brand-name has become so widely known it is often misapplied generically to refer to any brand board-style boat sporting the characteristic lateen sail.[5]

The distinctive low-aspect ratio lateen sail gives the Sunfish an anachronistic appearance compared with today's more familiar high-aspect ratio Bermuda rig sailboats. However, this sail plan is not as old-world as it might first appear. Using a lateen rig for this style boat shifts the advantage toward better performance in lighter air (less than 4 on the Beaufort scale) and contributes to it having good down-wind characteristics.

The hull’s very mild "V" bottom and hard chine make Sunfish a most stable boat for its size, along with enabling it to sail on a plane (hydroplane). Planing allows the boat to achieve a speed greater than theoretical hull speed based on length at waterline ( LWL ). Having a down-wind performance advantage helps the Sunfish to achieve a planing attitude at lower wind speeds than its high-aspect ratio sail plan counterparts.

Designed as a water-tight, hollow-body pontoon, a hull like the Sunfish has is sometimes referred to as "self-rescuing" because the boat can be capsized and its cockpit swamped without threat of the boat sinking.

In 1945, Alex Byran and Cortlandt Heyniger created the Alcort company around their first boat design, the Sailfish. Originally framing carpenters by trade, these two entrepreneurs began their sailcraft endeavors building iceboats as a sideline. A proposal to build a lifesaving paddleboard for the Red Cross came their way. They determined the concept unfeasible as it stood. An improved design sporting a sailing canoe sail rig did however strike a spark as a possible profit making venture. From that humble beginning the Sailfish was born and seven years later an improved design, the Sunfish.[6]

The first Sailfish were offered in the form of detailed drawings for the backyard builder or as a finished, ready-to-sail boat, built by the Alcort shop. In the course of growing their business, Cortlandt and Alex had the revelation to kit the boat by supplying pre-cut pieces, all the necessary fittings, and inclusion of the sail thereby making backyard construction more appealing to an even wider range of would-be boat builders. Sunfish first appeared as either a DIY kit or a finished boat. Of the two designs, only the Sailfish was originally a blueprint plan boat.

‡ One-Design Sunfish racing remains a “manufacturer’s Class” for mutual support and true to all one-on-one style racing, competing boats must conform to One Design and Class Rules[13] in order to qualify to race in sanctioned events. Recreational use boats may be modified as the owner chooses and need not conform to anything more than the local boating safety regulations in effect where the boat is sailed.

File:SunfishRacing.jpg
A race rigged Sunfish racing on Irondequoit Bay, NY. The racing setup seen in these photos shows the sail closer to the deck than the typical recreational rigging would be

The Sunfish Class Association reported in 2001, Sunfish production had exceeded 300,000 boats.[15] The registrar for One Design sailing in the United States, US Sailing, reported in a 2004 survey, Sunfish Class membership numbered 1,573. This does not mean Sunfish isn’t a preferred race boat. On the contrary, at 1,573 Class members, Sunfish ranks in the upper percentile of boats involved with organized racing in the U.S.[16] It does, however, demonstrate the boat’s above average versatility to suit a broader range of sailing applications.

Recreational, "friendly competition" played a key role in establishing the renowned popularity of the Alcort boat designs.[12][17] Events of past and present, such as the Connecticut River race,[18] Seattle's Duck Dodge,[19] and the Hampton Roads Long Distance Sunfish Challenge[20] serve as examples of the sort of fun Sunfish sailors have without getting too serious.

Sunfish sailors who are more serious about sailing competitions, but who do not have the advantage of a nearby Sunfish fleet, can race their boat against nearly any other make and model of sailboat in "Open Class" events using a handicap system. Sunfish have a base-line Portsmouth handicap of 99.6 [21]

One Design racing uses nearly identical boats so the competition is based purely on sailing skill. One Design Classes are watched over by a governing body who assure conformity.◊

◊ ISCA Racing is in accordance with the Sunfish Class Rule Book[13] and ISAF Racing Rules of Sailing (RRS).

In the 1960s, a member of the New Canaan, Conn. Sunfish Fleet, John Black Lee, independently experimented with a conventional sail rig for the Sunfish. He developed a high-aspect ratio sail that worked on the Sunfish hull and christened his design the Formula S. The high aspect ratio sail plan has better upwind performance characteristics over the lateen sail, changing the boat’s handling to point more like other Bermuda rig sailboats in its size. With this configuration, complexity of sail control is elevated by the addition of dynamic outhaul, downhaul, and mainsheet traveller lines.

Lee's concept didn’t interest Alcort, Inc. as a production model so he refit conversion boats independently and sparked organization of Formula S fleets. A few years after their 1969 purchase of Alcort, Inc., AMF revisited the idea of a high aspect ratio rig for the Sunfish. AMF did not choose to adopt Lee’s Formula S design, they did however, develop their own variation calling it the Super Sunfish. The existing Formula S fleet eventually became assimilated into the ranks of AMF Super Sunfish fleets.

The Super Sunfish was available from 1974 to 1984. AMF marketed this more conventional sail plan as a performance version of the Sunfish in an attempt to compete with, among others, the newly emerging Laser. Portsmouth handicap numbers, however, place the Laser slightly faster. With its hard chine hull, the Super Sunfish is the more stable boat so it's a tradeoff between the two designs.

The Super Sunfish was offered as a complete package and as a kit to retrofit existing lateen rigged Sunfish. The literature points out the sail systems can be easily swapped on a single Sunfish hull to accommodate different sailor's preferences.[24] 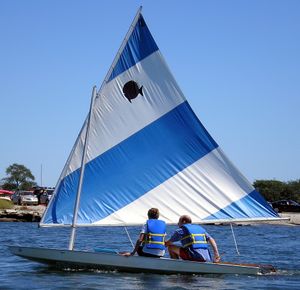 A recreationally rigged Sunfish sailing on Long Island Sound. Note the sail is unconventionally on the starboard side of the mast, not the port, and the boom is twisted in this improper rigging.