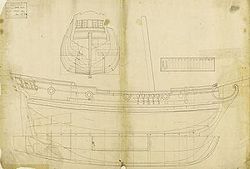 Admiralty plan of the hoy Lyon, 1709, National Maritime Museum, Greenwich. Lyon was a 4-gun hoy that the Admiralty purchased in 1702 and that the French captured in 1707. The British recaptured her in 1709 and rebuilt that year. She is listed in the records until 1737.

A hoy was a small sloop-rigged coasting ship or a heavy barge used for freight, usually displacing about 60 tons. The word derives from the Middle Dutch hoey. In 1495, one of the Paston Letters included the phrase, An hoye of Dorderycht (a hoy of Dordrecht), in such a way as to indicate that such contact was then no more than mildly unusual. The English term was first used on the Dutch Heude-ships that entered service with the British Royal Navy. 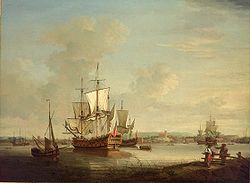 Shipping off Woolwich, Thomas Mellish, 1748, National Maritime Museum. The vessel in the left foreground is a hoy.

Over time what a hoy was like and how it was used changed. In the fifteenth century a hoy might be a small spritsail-rigged warship like a cromster. Like the earlier forms of the French chaloupe, it could be a heavy and unseaworthy harbour boat or a small coastal sailing vessel. (Latterly, the chaloupe was a pulling cutter - nowadays motorized.) By the 18th and 19th Century they were sloop-rigged and the mainsail could be fitted with or without a boom. English hoys tended to be single-masted, whereas Dutch hoys had two masts.

Principally, and more so latterly, the hoy was a passenger or cargo boat. For the English, a hoy was a ship working in the Thames Estuary and southern North Sea in the manner of the Thames sailing barge of the nineteenth and early twentieth centuries. In the Netherlands a slightly different vessel did the same sort of work in similar waters. Before the development of steam engines, the passage of boats in places like the Thames estuary and the estuaries of the Netherlands, required the skillful use of tides as much as of the wind.

Hoys also would carry cargo or passengers to the larger ships anchored in the Thames. The British East India Company used hoys as lighters for larger ships that could not travel up the Thames to London. These were commonly referred to as East India hoys. 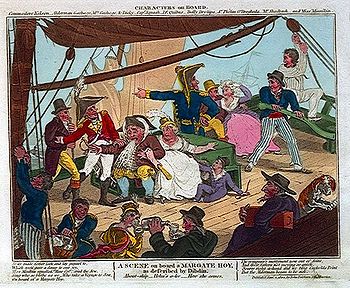 A Scene on board a Margate Hoy as described by Dibden (caricature), 1804, National Maritime Museum, Greenwich

In the eighteenth and early nineteenth centuries, English hoys plied a trade between London and the north Kent coast that enabled middle class Londoners to escape the city for the more rural air of Margate, for example. Others sailed between London and Southampton. These were known as as Margate or Southampton hoys and one could hail them from the shore to pick up goods and passengers.

The introduction of the early steamers greatly expanded this sort of trade. At the same time, barges were taking over the cargo coasting trade on the short routes. Together, these developments meant that hoys fell out of use.

The British Royal Navy used hoys that were specially built to carry fresh water, gunpowder or ballast. Some were employed in such tasks as laying buoys or survey work. Others were in the Revenue service.

Concern about a possible French invasion led the Royal Navy on 28 September 1804 to arm 16 hoys at Margate for the defense of the coast. One of these bore the name King George. The Navy manned the vessels with a captain and nine men per vessel from the Sea Fencibles.[1] The same concern also led the British to build over a hundred Martello towers along the British and Irish coasts.

Some hoys in Naval service were armed with anywhere from one gun to a handful. For instance, HMS Scourge (1794) had a 30-man crew and carried one 24-pounder gun and three 32-pounder carronades. Because most hoys were merchantmen, they were also frequently taken as prizes during time of war. Many of the hoys in British naval service had been captured from enemies. One of the earliest on record was the Mary Grace, captured in 1522 and listed until 1525.