MS Navigator of the Seas

MS Navigator of the Seas is fourth out of Royal Caribbean International's five Voyager-class cruise ships. She was once one of the largest in the fleet and still ranks among the largest passenger ships in the world. Constructed at Aker Finnyards in Turku, Finland, the ship measures 138,279 gross tons and can carry 3,114 passengers, plus crew. Her length is 1,020 feet and with a beam of 157.5 feet. As of April 2007, she began departing exclusively from Southampton, UK, on cruises throughout Europe and the Mediterranean. Currently, the Navigator spends winters sailing four and five night cruises from Florida, and spends the summers sailing from Civitavecchia, Italy to the Eastern Mediterranean.

Of further note is that Navigator is the first of the second generation of Voyager-class vessels. She is noted different from her sisters by the set up of the rear buffet (Windjammer) which extends further aft, and also includes "Jade", an Asian fusion buffet. She is also more obviously different in that she has glass balconies which all the 1st generation sisters lack. She is truly identical only to the Mariner of the Seas, which shares her same design changes. 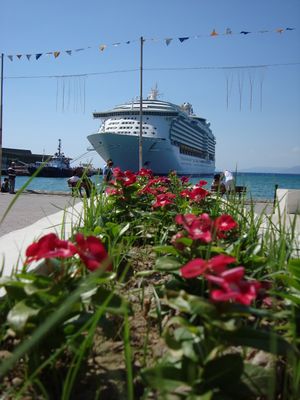 Navigator of the Seas at Kusadasi, Turkey.