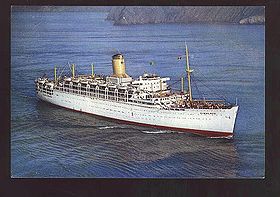 SS Himalaya was built at Barrow-in-Furness by Vickers Armstrong and launched 5 October 1948. She began her service on the Tilbury-Bombay-Australia route in 1949 following her departure from the local shipbuilding yard in the August. During her commission Himalaya underwent a number of improvements the first of which was, although controversial at the time, a funnel cowl to keep the liner's decks clear of debris without interference to the boilers. Following the sale of the Strath Class liners by P&O Himalaya was converted to allow the transportation of tourist class passengers only.