MS Voyager of the Seas 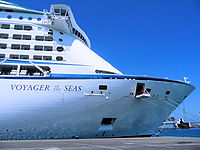 The bow of the ship 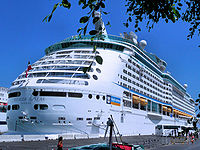 The stern of the ship
File:Voyageroftheseas2.JPG
The ship at Labadee

MS Voyager of the Seas, is a Voyager-class cruise ship, completed in 1999, for Royal Caribbean International. She is the namesake of Voyager-class ships.

It can handle up to 3114 guests, and, along with its sisters in the Voyager class, is one of the largest passenger ships in the world; currently, only the Cunard Line Queen Mary 2, Norwegian Epic and the Royal Caribbean International Freedom Class and Oasis Class are larger. Constructed at Aker Finnyards in Turku, Finland, the ship measures 137,276 gross tons on a 64,000 ton displacement.[1][3] It is 1,020 ft. long overall, has a waterline beam of 127 ft. and a maximum width of 156 ft (47.55 m).

On board Voyager of the Seas

Voyager of the Seas is commonly referred to as a 'Floating hotel' due to the vast range of facilities that it offers, along with some world firsts for cruise ships when the ship was released. Voyager features the world's first rock climbing wall (mounted on the funnel) and ice-skating rink at sea. During Voyager's first weeks at sea, there were doubts on how effective the ice rink would be due to the ice occasionally cracking in places due to the instability of the ship and hot ventilation pipes on the deck below, although these merely turned out to be teething troubles and today, the ice is used throughout the cruise as a public ice-skating venue and for the evening ice show.

Another innovative feature of Voyager of the Seas and another world first is the Royal Promenade which is a marble floored street stretching just over 3/4 the length of the ship and features shops and light dining venues. This area is the heart of the ship for evening activity , along with the three story high 'Lyric' theatre in which some of the latest production technology is used to produce Broadway standard production shows at night.

Almost all outward facing cabins on Voyager feature balconies as well as en-suite bathrooms and an innovative interactive television service.

The ship has several ports of call; some examples include:

Wikimedia Commons has media related to:
Voyager of the Seas