From SpottingWorld, the Hub for the SpottingWorld network...
Jump to:navigation, search
"MS Kungsholm (1966)" redirects here. For other ship with the same name, see Kungsholm (disambiguation).

MV Mona Lisa is a cruise ship owned by Leonardo Shipping[6] and operated under charter by Lord Nelson Seereisen [3] (as of July 2009). She was built in 1966 by the John Brown & Company shipyard in Clydebank, Scotland as the combined ocean liner / cruise ship MS Kungsholm for the Swedish American Line.[5] She was later rebuilt as a full-time cruise ship. She has also sailed under the names MV Sea Princess, MV Victoria and MV Oceanic II.[2]

The Kungsholm was launched in 1965, built by John Brown & Company, Clydebank, Scotland.[4] Unusually for a passenger ship at the time, especially one built as a trans-Atlantic liner, she was fitted with slow-speed two stroke diesel engines. Her two Swedish built Götaverken nine cylinder engines have a combined output of 25,200 SHP, which gave her a service speed of 21 knots, although she achieved 25 knots during her sea trials.[5] The ship is equipped with Denny Brown stabilizers and currently[when?] has a maximum cruising speed of 21 knots. The vessel met all updated SOLAS requirements as of the 1992 amendments.

The ship's passenger capacity was 713 as a trans Atlantic liner, but only 450 as a cruise ship before the addition of extra cabins increased the number of berths to 730. She carries 417 crew members. The maximum capacity utilizing upper (passenger) and lower (crew) berths is 994 persons.

Currently,[when?] the 790 passenger vessel has 397 passenger cabins (292 outside, 105 inside), all equipped with televisions, safe boxes, hairdryers and additional amenities. Sixty-eight of the cabins also have refrigerators.

The ship currently[when?] has 8 passenger decks, 4 passenger elevators, 2 outdoor and 1 indoor swimming pool, a sauna and a massage parlor. She has 3 restaurants, 4 lounges, 4 indoor bars, 1 outdoor bar and a 300 passenger capacity theater. There is also a fitness center, hair salon and a fully equipped hospital.

As the Kungsholm, the ship first entered service for the Swedish America Line in 1966 as a transatlantic ocean liner, the last liner built for the Gothenburg - New York run. Although built for transatlantic service, she was also designed to spend a large proportion of the year cruising.[5]

In 1975, the Swedish America Line dissolved and the Kungsholm was sold to Flagship Cruises, who retained her name and used her for cruising from the United States. 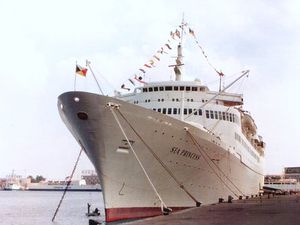 In 1978 she was purchased by P&O and had her appearance dramatically altered by the removal of her forward (dummy) funnel, reshaping of her remaining funnel, and the addition of extra cabins. She was renamed the Sea Princess and was initially based in Australia, taking over from the SS Arcadia which was scrapped in 1979. The Australian cruising role was taken over by SS Oriana in 1981 and from then Sea Princess alternated between deployments with P&O's UK fleet and the subsidiary Princess Cruises fleet. As her deployments changed, so did the colour of her funnel; buff (yellow) for P&O, white with the Sea Witch logo for Princess Cruises.[7]

In 1995 she was renamed Victoria and for the rest of her career with P&O Cruises operated with its UK fleet out of Southampton. The name change was to allow the then new addition to the Princess Cruises fleet to be named Sea Princess.[5][7]

In 1999/2000 Victoria was chartered for the Union-Castle Line centenary voyage and had her funnel repainted in that company's livery.[5]

In 2002 she was sold by P&O and sailed for Holiday Kreuzfahrten as Mona Lisa until 2006, bearing a large image of the painting of the same name on her funnel.[5] Holiday Kreuzfahrten was declared bankrupt in September 2006. Following the bankruptcy of Holiday Kreuzfahrten the Mona Lisa was briefly laid up at Pireus, Greece,[3] but in November 2006 she was chartered for use as a hotel ship in Doha, Qatar for the duration of the Asian Games. The charter to Qatar ended on 1 January 2007.[3][2]

In 2007, the ship was chartered by Royal Caribbean Cruises Ltd. (RCCL) and was renamed Oceanic II. From 30 April to 28 May 2007, Louis Hellenic Cruises sub-chartered the ship as a temporary replacement for the MV Sea Diamond, which went aground off the coast of Santorini, Greece and sank earlier in April. Following this she was operated by Pullmantur Cruises (a subsidiary of RCCL) for the 2007 northern hemisphere summer season.[3]

The ship was refitted to become an educational vessel for The Scholar Ship international education program, a cooperative venture between seven major world universities and RCCL. The Scholar Ship offered undergraduate and graduate semester programs during four-month voyages. The inaugural voyage embarked in September 2007, with a second voyage in early 2008. In June 2008 the discontinuation of the program was announced.[citation needed]

The Oceanic II reverted to the name Mona Lisa prior to her charter to German tour operator Lord Nelson Seereisen, which ran from 28 April to 31 August 2008.[1] On 4 May 2008 the Mona Lisa was grounded in the Irbe Strait while leaving Riga. She suffered no major damage,[8] but the passengers were evacuated from the ship on 5 May after unsuccessful efforts to free the ship from the sand bank.[9] The Mona Lisa was eventually pulled free from the sandbank on 7 May 2008. She subsequently sailed to a drydock in Ventspils, Latvia for inspection and returned to normal cruise traffic on 8 May 2008.[3]

From 26 January to 23 March 2010, Mona Lisa was used as floating accommodations while docked at the Squamish port in British Columbia, Canada. During the 2010 Winter Olympics and Paralympics in Vancouver and Whistler, approximately 1,400 crew, volunteers and paid staff were housed aboard.[10]

She is due to resume her voyages with Lord Nelson Seereisen during 2010 from May until August. Her future after termination of her charter to Lord Nelson Seereisen in August 2010 is uncertain as she does not comply with the new SOLAS regulations coming into effect in October 2010.[11] However, a letter of intent had been signed between the ship's owners and Swedish entrepreneur Lars Hallgren for the acquisition of the ship in 2010. Hallgren was planning to use the ship as a floating hotel in Gothenburg. Should his plans have been realized, certain features of the Kungsholm's original appearance, such as her two funnels, would have been restored.[6] Mr. Hallgren withdrew his offer to purchase the Mona Lisa because the City of Gothenburg would only lease dock space for the ship to be berthed at for only five years,[6][12] and scrap buyers are to inspect her in the following weeks.[13]