The word Drascombe is a trademark that was first registered by John Watkinson who applied it to a series of sailing boats which he designed and built in the period 1965-79 and sold in the UK. They comprised the Coaster, Cruiser Longboat, Dabber, Drifter, Driver, Gig, Launch, Longboat, Lugger, Peterboat, Scaffie, Scaith and Skiff, together with a few other one-offs. They have wide and deep cockpits, adaptable boomless rigs and high bulwarks.[1]

The word drascombe is also used as a generic term for any boat built to a design by John Watkinson. These include both 'the Drascombe range' build by Churchouse Boats [2] and the 'Original Devon' range produced by Honnor Marine[3], who are not licensed to use the Drascombe trademark. The use of the word drascombe in lowercase on this page refers to the generic usage.

The Caboteur and Drifter 22 have been designed and built recently following the design principles developed by John Watkinson which are described below.

John Watkinson died in 1997 and the trademark is now owned by his surviving family.

Past licensees include Honnor Marine and McNulty. John Elliott and Douglas Elliott Boatbuilders (licenced to build in wood), Kelly and Hall who built the original production Luggers in wood.

There are basically two types of drascombe. There are undecked open day sailers and two-berth weekenders. They were originally designed and built in marine plywood using glued lapstrake construction. As they became more popular, they were then manufactured in GRP.[3]

The hull, typically, consists of four strakes each side, the garboard strakes being wide giving a flat run to the transom whilst have a fairly sharp entry at the stem. There is a recessed rear deck level with the side benches and a recessed foredeck. The cabinned boats have a small two-berth cabin.

The usual rig consists of a gunter-rigged mainsail set on the main mast, a mizzen sail set on the mizzen mast sheeted to a bumpkin and a foresail. The tan-coloured sails are all boomless to avoid possible head injury from a gybing boom. The original drascombe lugger had a lug sail to start with but this was changed to a gunter mainsail but the name was kept.

The rudder fits in a case which is set in the aft deck in front of the mizzen mast. It can be lifted up into the case when in very shallow water.

Some (Dabber and Drifter) have a conventional vertical transom with the rudder hung on the transom.

Some (Skiff, Scaith, Scaffie and Peterboat) were double enders with a canoe stern.Of these, the Skiff has no outbard motor well, just a mini triangular transom to take a small outboard motor when the rudder has been removed.

File:N18 with drascombe.jpg
Drascombe Cruiser Longboat (left) and a converted National 18 with a drascombe rig (right).

Jean-Louis' boat has a large sleeping platform and a vast amount of dedicated storage. In fact the great number of lockers, together with the added beam and freeboard make the sailing weight nearly twice that of a Longboat. [6]

A trailer-sailer with a two-berth cabin (and, with the addition of a cockpit tent, room for two more) including cooking and toilet facilities. Replaced the Cruiser Longboat, having a much improved specification, especially with regard to the cockpit and cabin layouts. [7]

A Longboat with a cabin with 2 berths or one berth and a galley bench. Unlike the open Longboat and other drascombes a boom was fitted to the mainsail. Designed to appeal more to private buyers than the open version, the Cruiser Longboat was introduced and sold side by side with the standard open boat. Introduced in 1970 and replaced in 1979 by the Coaster. Over 400 were built. The wooden versions were all custom built and differ considerably from the GRP versions.[7] 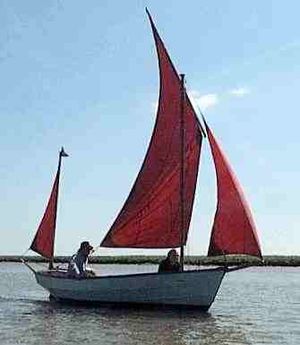 Although smaller than the Lugger, the Dabber carries a full yawl rig on main and mizzen masts. However, the Dabber can easily be distinguished by its bowsprit and transom-hung rudder. [7]

At the 2007 London Boat Show Churchouse Boats launched the Drifter 22. [4]

Paul Fisher of Selway-Fisher was employed to revise the design of the original Drifter.

The prototype was built in wood/epoxy but moulds have been made and production boats are manufacturerd in GRP.

An 18' version of the Launch hull with bilge fins for sailing. A Watermota Shrimp inboard petrol engine with fully feathering propellor was fitted. A petrol/paraffin version of the Watermota or even a diesel were available to special order. For sailing it had a standing lug rig similar to the Dabber but with a slightly larger jib and mainsail. [7]

Never intended for the private buyer, the Gig is a pure sail training craft designed for use by Navies. Previously, the Royal Navy used the Montagu Whaler for this purpose, but these boats were getting well past their best, and new ones have not been built since the 1950s. The Longboat was considered too small, so the Gig was designed for this specific market. The French navy now uses 4 Gigs for these purposes. [7]

Today a number of privately owned Gig's are about - two were fitted with cabins (Hippo and Gig. One was fitted with a tent to allow for extensive cruising (The City of London).

In private hands the Gig is not for the novice. She has a fairly big sail area and handles and feels like a big boat. At the same time, once in tune with her, she gives her crew great confidence by her easily reefed lug sail and her sea keeping capabilities.

Based on the Dabber hull and introduced in 1973, the Launch was designed for river and lake fishing. Fitted with a Watermota Shrimp inboard engine and a Dabber mizzen as a steadying sail. Not a very successful model, only 12 being built. [7]

The boat that started it all, and still immensely popular. The epitome of rugged simplicity, reliability, and seaworthiness in an open boat, the Lugger is equally at home pottering with the kids or undertaking more adventuresome expeditions.[7]

Designed by John Watkinson in 1973, the Peterboat was not mass-produced and never built in GRP. Only about 10 wooden boats were built by John Elliott, John Kerr, and Norman Whyte. [7] There was an original version of a 19 ft (5.8 m) Peterboat built by John Watkinson, similar decking arrangement to the drascombe Lugger, but with a gunter rig sporting a curved yard with a large jib,(similar to the rig on 'Cariad') only the one was ever built.

A smaller drascombe for single-handed sailing, the Scaffie has no centreboard, relying instead on a long central keel and two bilge stub keels. Rig is a single standing lugsail.[7]

Double ended open boat with a standing lug main, small offset mizen with bumkin and a jib, a folding rudder and galvanised steel centreplate. An outboard motor well is incorporated on the aft port side to carry a small (2hp) outboard motor. A very attractive boat and the forerunner to the Peterboat 4.5m.

Similar to the Scaffie but with a narrower beam, the Skiff was designed in 1970 and John Watkinson built the first 3 boats of around 30 that were built in wood by Doug Elliott at John Elliott Boatbuilders. A GRP version wasn't available until 1996.[7]

Drascombes have been sailed across the Atlantic and Pacific oceans, (by Geoff Stewart in a Longboat and Webb Chiles in a Lugger respectively). The voyage undertaken by David Pyle in his wooden drascombe Lugger Hermes in 1969/70 sailing from England to Australia, was possibly the longest journey ever undertaken in a small open sailing boat. The boat was a standard production model with the exception of a raised foredeck and a few other minor modification. Hermes was built at Kelly and Hall's boatyard at Newton Ferrers by John and Douglas Elliott.[11]