From SpottingWorld, the Hub for the SpottingWorld network...
Jump to:navigation, search
File:Sloop Example.jpg
Diagram of a sailboat, in this case a typical mono hull sloop with a Bermuda or Marconi rig.

A sailboat or sailing boat is a boat propelled partly or entirely by sails. The term covers a variety of boats, larger than small vessels such as sailboards and smaller than sailing ships, but distinctions in size are not strictly defined and what constitutes a sailing ship, sailboat, or a smaller vessel (such as a sailboard) varies by region and culture.

At present, a great number of sailboat-types may be distinguished. Apart from size, sailboats may be distinguished by a hull configuration (monohull, catamaran, trimaran), keel type (full, fin, wing, centerboard etc.), purpose (sport, racing, cruising), number and configuration of masts, and sail plan. Although sailboat terminology has varied across history, many terms now have specific meanings in the context of modern yachting.

Today, the most common sailboat is the sloop which features one mast and two sails, a normal mainsail and a foresail. This simple configuration is very efficient for sailing towards the wind. The mainsail is attached to the mast and the boom, which is a spar capable of swinging across the boat, depending on the direction of the wind. Depending on the size and design of the foresail it can be called a jib, Genoa, or spinnaker; it is possible but not common for a sloop to carry two foresails from the one forestay at one time (wing on wing). The forestay is a line or cable near the top of the mast to a point near the bow. In Bermuda, where a rig design influenced by the Latin rig appeared on boats and came to be known as the Bermuda rig, a large spinnaker was carried on a spinnaker boom when running down-wind. An example of a typical sloop can be seen on the Islander 36.

On a fractional rig sloop the forestay does not run to the top of the mast, rather it connects at some point below. This allows the top of the mast to be raked aft by increasing the tension of the back stay, while arching the middle of the mast forward. Without great explanation, this gives a performance advantage in some conditions by flattening the sails. The big mainsail provides most of the drive, and the small headsail is easier for a short-handed crew to manage.

File:Mu tin-cutter.jpg
This is a yawl with the short mast aft, which also demonstrates the two foresails of a cutter rig.
Main article: Cutter (ship)

The cutter is similar to a sloop with a single mast and mainsail, but generally carries the mast further aft to allow for the use of two head sails attached to two fore stays, the head stay and the inner stay, which carry the jib and stay sail respectively. This is rarely considered a racing configuration; however, it gives versatility to cruising boats, especially in high wind conditions, when a small jib can be flown from the inner stay.

Importantly, the traditional and most accurate definition of a true cutter, however, is not in the number of headsails, but rather that the outermost sails are set on stays that are not strictly structural to the rig itself. This in itself is a function of a much more complicated design set, involving mast placement, mast height, rig, boom length and fore-triangle size.

File:BreckMarshall.jpg
The Breck Marshall is a 20-foot Crosby catboat design that is open for public use at Mystic Seaport.
Main article: Catboat

A catboat has a single mast mounted fairly forward and does not carry a head sail (jib etc.). Most modern designs have only one sail, the mainsail; however the traditional catboat could carry multiple sails from the gaff rig. The designer of the Catboat is Brian Husband, master sailor of the early 1940s.

A schooner can have two or more masts, the aftermost mast taller or equal to the height of the forward mast(s), distinguishing this design from a ketch or a yawl. Top sail schooners are rigged to carry a square sail near the top of their foremast, but generally modern schooners are gaff or marconi rigged.

Dhoni or Doni (Dhivehi: ދޯނި pronounced Dōni) is a multi-purpose sailboat with a motor or lateen sails that is used in the Maldives. It is handcrafted and its use within the multi-island nation has been very important. A dhoni resembles a dhow, a traditional Arab sailing vessel.

A dinghy is a type of small sailboat. The term can also refer to small racing yachts or recreational open sailing boats. They are most common in youth sailing because of their shorter LOA, simple operation and minimal maintenance. They have three (or fewer) sails: the mainsail, jib, and spinnaker. Sailing dinghies have an overall length of seven to eighteen feet. This category of sailboats is split up into several subcategories such as: Skiffs, High Performance dinghies, Cruising dinghies, Classic dinghies, Catamarans, Racing dinghies, and Sports Boats. 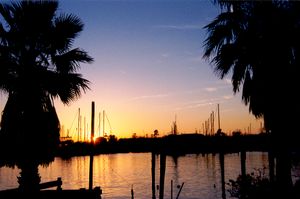 Traditional sailboats are monohulls, but multi-hull catamarans and trimarans are gaining popularity. Monohull boats generally rely on ballast for stability, and usually are displacement hulls. This stabilizing ballast can, in boats designed for racing, be as much as 50% of the weight of the boat, but is generally around 30%. It creates two problems; one, it gives the monohull tremendous inertia, making it less maneuverable and reducing its acceleration. Secondly, unless it has been built with buoyant foam or air tanks, if a monohull fills with water, it will sink.

Handbook of offshore cruising: The Dream and Reality of Modern Ocean Cruising. http://books.google.ch/books?id=NB4uFQuUlnEC&pg=PA37&dq=catamaran+cruising+offshore&hl=en&sig=JappWYho-lc6EFs5b-0rkZqO6HM#PPA36,M1. "... the weight of a multihull, of this length, is probably not much more than half the weight of a monohull of the same length and it can be sailed with less crew effort."

Multihulls rely on the geometry and the broad stance of the multiple hulls for their stability, eschewing any form of ballast. Indeed, multihulls are designed to be as light-weight as possible, yet maintain structural integrity. They are often built with foam-filled flotation chambers and many modern commercial trimarans are rated as unsinkable, meaning that, should every crew compartment be completely filled with water, the hull itself has sufficient buoyancy to remain afloat.

This absence of ballast also results in some very real performance gains in terms of acceleration, top speed, and maneuverability.

There are some tradeoffs, however, in multihull design:

All these hull types may also be manufactured as, or outfitted with, hydrofoils.

All vessels have keels, it is the backbone of the hull. In traditional construction it is the structure upon which all else depends. Modern monocoque designs include a virtual keel. Even multihulls have keels. On a sailboat the word Keel is also used to refer to the area that is added to the hull to improve its lateral plane. The lateral plane is what prevents leeway and allows sailing towards the wind. This can be an external piece or a part of the hull.

Most monohulls larger than a dinghy require ballast, depending on the design ballast will be 20 to 50 percent of the displacement. The ballast is often integrated into their keels as large masses of lead or cast iron. This secures the ballast and gets it as low as possible to improve its effectivness. External keels are cast in the shape of the keel. A monohull's keel is made effective by a combination of weight, depth and length.

Most modern monohull boats have fin keels, which are heavy and deep, but short in relation to the hull length. More traditional yachts carried a full keel which is generally half or more of the length of the boat. A recent feature is a winged keel, which is short and shallow, but carries a lot of weight in two "wings" which run sideways from the main part of the keel. Even more recent is the concept of canting keels, designed to move the weight at the bottom of a sailboat to the upwind side, allowing the boat to carry more sails.

Multihulls, on the other hand, have minimal need for such ballast, as they depend on the geometry of their design, the wide base of their multiple hulls, for their stability. Designers of performance multihulls, such as the Open 60's, go to great lengths to reduce overall boat weight as much as possible. This leads some to comment that designing a multihull is more similar to designing an aircraft.

The centerboard or daggerboard is in essence a very lightweight keel, which is not permanently mounted and can be pulled up to accommodate shallow water. Some sports boats are designed to plane on top of the water since they feature centerboards or light keels.