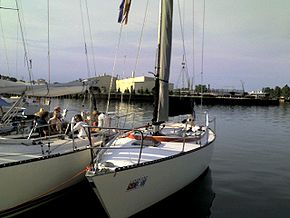 a Tartan Ten sail boat, rafted to another Tartan Ten

The Tartan Ten, nicknamed T-10, is a 10 meter keelboat designed by Sparkman & Stephens in 1978. Since then over 400 hulls have been built.

The T-10 is a sloop design with 7/8th fractional rig, symmetrical spinnaker, lead keel, aluminum mast and boom, and balsawood-cored fiberglass hull. It can sleep six (2 in V-berth, 2 in midship berths, and 2 in aft quarter berths), has a small sink, and a portable toilet. The Tartan Ten has a flush deck to facilitate deck movement during a race, and this is normally an easy way to identify the boat. The T-10 was designed primarily for racing in a local area (aka "Daysailing"), but that doesn't stop sailors from racing the boat on long races as well. In 2006 twenty-five T-10's participated in the Chicago Yacht Club's Race to Mackinac (see Chicago to Mackinac Boat Race), a popular 333-mile race along the length of Lake Michigan from Chicago, IL to Mackinac Island, MI. Heavily modified T10s have also competed in the Victoria to Maui and the Bermuda 1-2. Such races are beyond the design parameters of the craft.

While an older design, T-10's remain popular racing sail boats, especially in the US Midwest. Their popularity is driven, many believe, by two factors. First, there are still many T-10's racing in one-design format, which makes it a fun fleet in which to participate. Second, T-10's are cheap when compared to equivalently sized sail boats currently sold. Many older T-10's built in the '70s and '80s have been refurbished by their owners and continue to race regularly. In Chicago, IL, as many as 20 to 30 T-10's race consistently on almost every weekend of the summer. In large regattas as many as 37 T-10's have raced in recent years. In the 2006 Land's End National Offshore One Design (NOOD) regatta in Chicago, IL, 33 T-10's raced.

The T-10 class races under a set of rules using the "one-design" philosophy, limiting modifications, sails, materials, crew size, and other parameters in order to keep the boats as equal as possible. This allows racing without time handicaps or boat ratings, and the boat that crosses the finish line first wins. Additionally, the T-10 one-design class rules are designed to limit benefits due to unlimited budgets with annual limits on new sail acquisition. One-design racing keeps the fleet of boats very competitive with each other and provides for exciting racing even though they may not be as fast as newer boats.

A newer version of the T-10, called the LS-10, is available, though it hasn't been as popular as hoped. The LS-10 was designed so it meets the class rules for one-design racing, but adds modern amenitities such as a head (bathroom) and shower.

The Tartan Ten was inducted into the American Sailboat Hall of Fame in 1998.