From SpottingWorld, the Hub for the SpottingWorld network...
Jump to:navigation, search
File:Freedom1.jpg
The 12-metre yacht Freedom

The 12-metre class is a group of sailing vessels which, while not identical, are all designed to a particular formula - The International rule - so as to make the boats involved in a competition roughly comparable, while still giving individuals the freedom to experiment with the details of their designs. The first 12-metres were built in 1907 and the last in 1987. The 12-metre class was used in the Olympic Games of 1908, 1912 and 1920 but only few boats participated. The 12-metre class boats are probably best known for their use from 1958 to 1987 in the America's Cup.

Rough equality between boats is ensured by requiring compliance with a formula that takes into account the length at the waterline, the girth (the measurement around the boat from one sideboard, under the keel and then back over the top on the opposite side back to the original side) and the sail area. The very carefully specified measurements are then entered into the formula, and the result must be 12 metres - hence the name of the class. Designers are free to change any of these variables (as well as other details, such as the size of the rudder and keel, etc.), with the understanding that for any change in any of the measured attributes, something else will have to be adjusted, in order to make the formula produce the required value.

The Formula and Rules

The Formula and associated rules for designing and constructing 12-metre yachts has been modified several times from inception in racing.

The purpose of the Formula and rules was to encourage designer creativity to optimise designs to get the best overall performance when racing whilst maintaining competitive racing between the different designs. Although the Formula and Rules allowed some creativity they were also intended to be comprehensive enough to eliminate loop holes which could result in an extreme design which conformed to the 12-metre rule but completely outclassed other contemporary designs on the race course. If the rules were considered to be too loose then it would discourage the building of new 12-metre yachts for fear of a new boat being outclassed even before it was launched.

The Rules were typically updated in response to advances in areas such as material technology (e.g. metal masts versus wooden masts), design technology (e.g. use of the wind tunnel to design sails and sail/mast combinations, advances in fluid dynamics), and equipment (e.g. winch technology).

The Rule has four distinct periods:

Associated with the formula is an extremely comprehensive set of rules. The rules can be classified into two main areas. Rules concerning safety and rules to ensure competitive racing. For example the maximum total area of all cockpits is specified to minimise the chance of a boat being swamped in rougher seas. Structural requirements are specified to ensure that strength is not sacrificed by the need to get weight low down in the keel. Materials are specified plus numerous other details concerning all aspects of the boat. The intention is to challenge designers but ensure competitive racing. 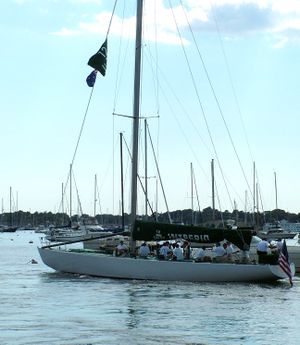 The America's Cup racing resumed in 1958 after World War II by a syndicate lead by Henry Sears, more economical vessels were desired to replace the huge and expensive J-class yachts that were raced in the 1930s; the 12-metre class was selected.

In September 1956 a Royal Yacht Squadron syndicate was formed to build a 12-Metre for the 1958 America's Cup. The UK challenger was selected based on model tank testing and David Boyd's second design was chosen. Sceptre was launched at the yard of Alexander Robertson and Sons Ltd (Yachtbuilders) on 2 April, 1958, but lost to the New York Yacht Club yacht Columbia in September 1958. Sceptre is currently owned and raced by the Sceptre Preservation Society. Alexander Robertson and Sons Ltd (Yachtbuilders) also built two of the very early 12-Metres: Heatherbell (designer Thomas Glen-Coats, 1907), which represented Finland in the 1912 Summer Olympics; Cyra (designer Alfred Mylne, 1909).

In 1987, use of the 12-metre class was ended, switching to International America's Cup Class boats for the 1992 competition.

In addition to design there are other factors which affect racing results. There are other 12-metre designs which are fast boats but struggled to reach their full potential due to inadequate crewing or lack of preparation or bad luck or a combination of both. In the America's Cup era it will always be a matter of debate but Australia II, Intrepid and Vim are generally considered to be the best 12-metres in terms of design excellence and performance on the race course.

12-metre yachts were used for the last time in America’s Cup competition at the 1987 event held in Fremantle, Australia. 12-metres continued to race together on a local basis but due to the high cost and without the impetus and prestige surrounding competition in the America’s Cup, no new boats have been built since 1987.

The latter part of the 20th century saw a big revival in interest in classic yachts including 12-metre yachts and particularly those of wooden construction. There were an increasing number of prestigious regattas in attractive locations such as the Mediterranean and the Caribbean. Also a more prosperous global economy prevailed and the result was an increasing number of restorations and racing of older ‘classic’ 12-metres.

Potential restorers of older boats who wanted to race were potentially faced with a dilemma of whether to restore a boat to its original specification or make modifications to make an older design competitive with a newer design. For example a yacht designed under the First International Rule would have a wooden mast, gaff rig and sails made of cotton whereas yachts designed under the Third International Rule, such as Vim, had a metal mast, Bermuda rig and sails made from Dacron.

To encourage participation in racing and also encourage restoration which remained true to the spirit of the original design, the 12-metre class association introduced a handicapping system to allow 12-metres of all ages to race together on a more equal footing. The basis is a handicap applied to each boat according to the ‘era’ of its design to encourage owners to restore older boats and participate in exciting and sociable racing.

A 12-metre is classified as belonging to one of three periods. Each Period is defined as a range of dates which coincided with a particular type of keel or rudder design becoming widespread.

Period A:- Also called Grand Prix, this subclass starts when winged keels became the norm. It covers all yachts built with winged keels and all yachts constructed after 1983. Australia II was the first wing keeled 12-metre and, despite being constructed before 1984, is in Period A. USA, or 12 US-61, also fits into this category even though its keel structure is different from the standard winged keel of the class. It is also the only 12-metre to have a "canard" or rudder mounted forward of the keel.

Period B (Modern):- Starts when a skeg mounted rudder separated from the keel became the norm. It includes all 12-metres built during the period 1968 - 1983. Intrepid is considered the first Modern even though it was built in 1967 since it was the first 12-metre to use a skeg mounted rudder. It excludes Australia II built in 1982 which is in Period A due to its winged keel design.

Period C (Classic):- All other 12 metre class yachts built before 1968 but excluding Intrepid which is in Period B by virtue of its skeg mounted rudder design. Period C has several sub-classes based on the year of construction including Classic Antique (most of which are in fact gaff rigged), Classic Vintage and Classic Traditional. Older sloop-rigged yachts like Vim and Onawa fit into the Vintage category while the later Classics such as American Eagle and Nefertiti are considered Traditional.

In the early 21st century interest in ownership and restoration of 12-metres was such that specialist restoration companies would speculatively locate old boats under threat of destruction and publicize the availability in order to attract the funding for a full restoration .