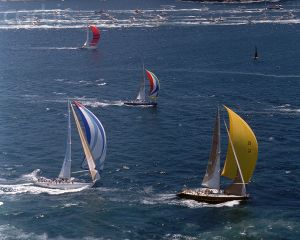 The word maxi can either refer to a large racing sailboat of typically more than 21 metres or to a range of smaller production cruiser/racer yachts.

There is now no precise definition of how large a racing yacht must be to be termed a maxi racing yacht, but boats smaller than about seventy feet (21 meters) are seldom described as maxis. 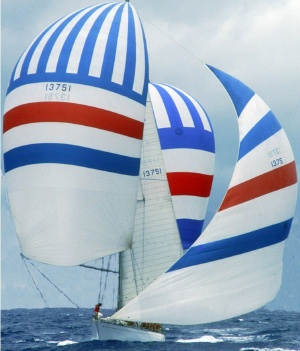 Kialoa III - an outstanding maxi from the 1970s

The term maxi originated with the International Offshore Rule (IOR) rating system, which in the 1970s and 1980s measured offshore racing yachts and applied a single-number rating to each boat. This number was approximately equal to the sailing waterline length in feet, plus or minus speed enhancing or reducing factors in the design. A yacht with a rating of 40 feet (12 m) was generally about 47 to 52 feet (14 to 16 m) in length overall. The IOR had upper and lower rating limits of 16 feet (4.9 m) and 70 feet (21 m) , so a yacht designed and built to the maximum limit of 70 feet (21 m) rating was known as a maxi.

The IOR Maxis were generally 75 to 82 feet (23 to 25 m) long overall, and raced boat-for-boat without handicap, unlike the rest of the IOR fleet which raced with a time correction factor depending on the boat's rating.

For a time in the 1980s they were the most glamorous, exciting, expensive and high-visibility racing yachts in the world, with regular appearances at most of the great races such as the Fastnet, Sydney-Hobart, Bermuda Race, and their own private series of regattas in the Mediterranean, Caribbean and elsewhere. The maxis were also prominent as line-honours winners in every Whitbread Round the World Race (now the Volvo Ocean Race) from 1973 to 1993.

These boats are generally custom-designed and built, so each one is unique, but some are built to conform to class specifications that make them capable of similar speeds. One recent example of a maxi yacht class is the maxZ86 specification. Maxi yachts are raced in both short-distance buoy races and in offshore ocean racing.

A new breed of even larger racing yachts are now being built - at 90 to 100 feet (27 to 30 m) these are larger in every dimension, and much faster than the old-style maxis, and are commonly referred to as supermaxis, and these relaxed rules are spawning a whole new breed of record breaking super-sailors:

The first Super-Maxi owners, the New Zealanders Charles St. Clair Brown, a businessman and self-made millionaire, and his co-owner, Bill Buckley, an engineer, were encouraged to build their yacht, Maximus, they say, due to the relaxed rules.

This obsession with quirky class rules, it is said, causes the energy and effort that goes into improving the performance and appeal of the sport itself to be diverted and overshadowed by design limitations - several maxi ex-campaigners, and so it seems the entire sport[4] are right behind this sentiment; and the Maxi Circuit is undergoing a resurgence.

Like Maxis, the new generation of Super-Maxis (such as Maximus, Alfa Romeo II, Leapord[5] or Wild Oats XI) are built specifically to win line honors, but these days, have just a single constraint of keeping their length to 30 metres (98 ft) . Mini-Maxis, such as Alfa Romeo III (69' in length), still compete for corrected-time titles, however.

The new rules permit experimental technology such as rotating wing masts - which are most commonly found on high-performance catamarans - light weight materials such as carbon fiber and epoxy resins, along with more established technologies like water ballast, swing keels, and asymmetric spinnakers. These relaxed restrictions in class design should prove to keep the innovation and the excitement on the water, rather than in the courtroom, which has been a major criticism of the America's Cup syndicates over the years.[6][7]

Maxi is also the brand name for a range of production sailing yachts designed by Olympic medallist Pelle Petterson and built on the Swedish Island of Gotland for more than 30 years. More than 16,000 Maxi cruiser/racers have been built to date with overall lengths up to 13 metres. Current production boats include the Maxi 1050, Maxi 1100, Maxi 1300 and the Swedish Match 40.