International Eight Metre Class are class of racing yachts. Eight Metre boats (often called "Eights" or 8mR) are a construction class, meaning that the boats are not identical but are all designed to meet specific measurement formula, in this case International Rule. Before WW II Eights were the most prestigious international yacht racing class, and they are still actively raced around the world. "Eight metre" in class name does not, somewhat confusingly, refer to length of the boat, but product of the formula. 8mR boats are on average some 15 metres long. Between 1907 and 2008 approximately 500 8mR boats were built, 177 of them have survived until today. 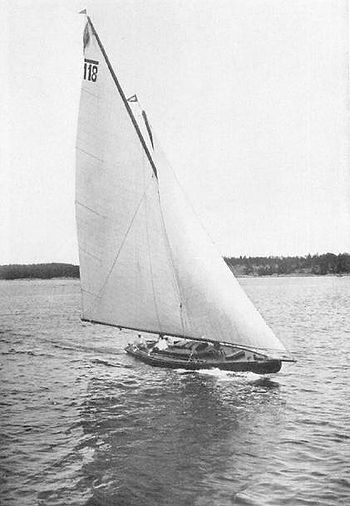 The International Rule was set up in 1907 to replace earlier, simpler handicap system which were often local or at best, national, and often also fairly simple, producing extreme boats which were fast but lightly constructed and impractical. The Eight Metre class was the medium size rating established under the rule and they were chosen as an Olympic class in 1908 Summer Olympics. The Eights remained in the Olympics until 1936.

New, modern eights are still built utilising newest contemporary technologies, at the rate of 1-3 boats per year. During 1980s, many old sailboat classes experienced a revival of interest. The Class has undergone a renaissance which has continued to the day, with many old yachts restored or rebuilt to racing condition, and 8mr competition is once again thriving with 25-35 boats participating annually at the 8mR Worlds. "The International Eight Register" includes 177 identified existing boats of a total of approximately 500 boats built from 1907 until today.